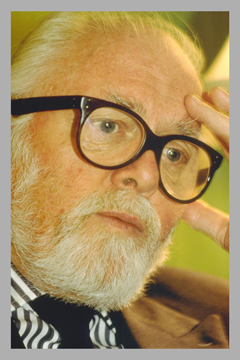 LONDON - Richard Attenborough was a lord, an Oscar-winning director for the much-lauded “Gandhi’’ and an unflagging pillar to British cinema. But Attenborough, who died Sunday at 90, was best known as Dickie.

Baby-faced as a young actor and whitely bearded in his older age, Attenborough - warmly known as “Dickie Darling’’ - presided over six decades of British moviemaking as both an actor and filmmaker with a genial warmth that endeared him to his fans and fellow actors.

“I have no great interest in being remembered as a great creative filmmaker,’’ he told The New York Times when “Gandhi’’ was released in 1982. “I want to be remembered as a storyteller.’’

The actor’s son, Michael Attenborough, told the BBC that his father died Sunday. He had been in poor health for some time.

Prime Minister David Cameron issued a statement calling Attenborough “one of the greats of cinema’’: “His acting in ‘Brighton Rock’ was brilliant, his directing of ‘Gandhi’ was stunning,’’ Cameron said.

Ben Kingsley, who shot to stardom for his performance as Gandhi, recalled Attenborough’s passionate 20-year struggle to bring Gandhi’s story to the big screen. The film won eight Oscars, including best picture (over “E.T.’’), best director for Attenborough and best actor for Kingsley.

“He placed in me an absolute trust and in turn I placed an absolute trust in him and grew to love him,’’ said Kingsley. “I along with millions of others whom he touched through his life and work will miss him dearly.’’

A product of the Royal Academy of Dramatic Art, Attenborough made his screen debut in the patriotic 1942 World War II film “In Which We Serve.’’ He served, too, in the Royal Air Force, and afterward became one of the best-known actors of postwar Britain.

In his 60-plus years of acting, he amassed some 70 credits, including “Brighton Rock,’’ “The Great Escape,’’ “Doctor Dolittle,’’ “Jurassic Park’’ (as the failed theme park developer) and the 1994 remake of “Miracle on 34th Street.’’ (Naturally, he played Kris Kringle.)

He transitioned into directing beginning with 1969’s World War I musical comedy “Oh! What a Lovely War.’’ He directed 12 films altogether, including “A Bridge Too Far,’’ “A Chorus Line,’’ “Cry Freedom,’’ “Chaplin’’ and “Shadowlands.’’

Attenborough was a constant advocate for the British film industry as well as other humanitarian causes, including his extensive work as a goodwill ambassador for Unicef. He was awarded the Martin Luther King Jr. Peace Prize in 1983.

He was knighted in 1976, and 17 years later received a life peerage, becoming Baron Attenborough of Richmond upon Thames.