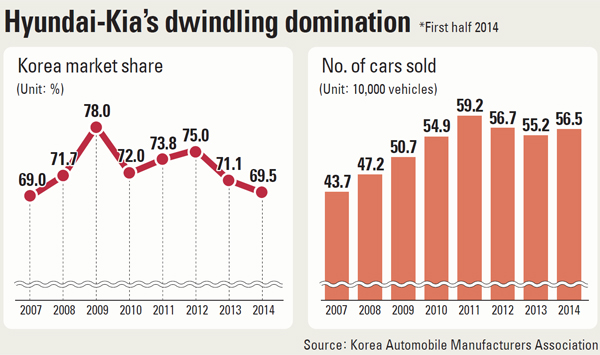 The combined market share for Hyundai Motor and Kia Motors in the first half of 2014 fell below 70 percent for the first time since 2007 as imported cars continue to wow Korean car owners.

According to data from the Korea Automobile Manufacturers Association (KAMA), Hyundai had a 42.7 percent share of the domestic car market in the first six months of this year, while its smaller affiliate Kia had 26.8 percent.

Since 2007, the first-half market share of Korea’s two largest automakers, both Hyundai Motor Group affiliates, had ups and downs, but their combined share was always above 70 percent.

Industry insiders said that the dip of Hyundai-Kia’s market share is due to an inexorable rise of imports, which have been growing aggressively in recent years. Imports sold in the first half of this year were 94,263 units, up 26.5 percent from a year earlier.

According to KAMA data, the market share of imports stood at 12.4 percent in the first half, which is nearly three times larger than in 2007 when they had only 4.5 percent of the market share.

“Local automakers, including Hyundai and Kia, are now competing with imports, which are driven by German premium auto brands that are armed with diesels,” said Kim Pil-soo, an automotive engineering professor at Daelim University College. “As local automakers lack diesel technologies compared to imports, and foreign automakers are releasing more affordable models here, it’s going to be a tough challenge ahead.”

Not only Hyundai and Kia but other local automakers - GM Korea, Renault Samsung Motors and Ssangyong Motor - are affected by the rise of imports. Those three local automakers had a combined market share of more than 25 percent in the first half of 2007, which has shrunk to just 17 percent this year.

In order to defend the home turf against imports, Korean automakers have been trying to release diesel and premium models.

According to data from the Korea Automobile Importers and Distributors Association (Kaida), 68.3 percent of imports sold in the first half were diesels, which is up 8.4 percentage points from a year ago.

Diesels have been gaining popularity in recent years with the rise of gasoline prices and an emphasis on fuel efficiency. Experts said that advanced diesel technologies, which have reduced noise and vibrations, are also attracting customers.

Meanwhile, Hyundai is adding the Aslan sedan later in the year to challenge luxury imports. In terms of size, the sedan is between the Grandeur and the Genesis.