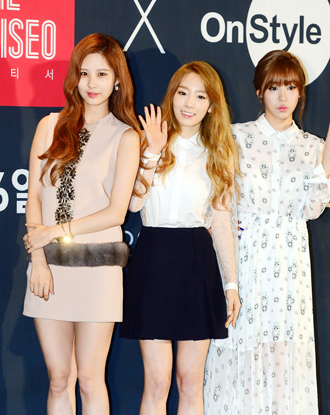 Members of Taetiseo, a subunit group of Girls’ Generation, wave at a press conference to promote their new reality show “The Taetiseo.”[NEWSIS]

Prior to the release of their much-awaited album, Tae-yeon, Tiffany and Seo-hyun of Girls’ Generation’s subunit Taetiseo will reveal parts of their day-to-day lives through a reality TV show.

Starting Tuesday, the three girls will appear in “The Taetiseo” on cable channel On Style, which is operated by CJ E&M.

“We wanted to make our comeback special by starring in a reality show,” said Tiffany during a press conference held last week at CJ E&M’s headquarters in Sangam-dong, northwestern Seoul. “First, audiences will get to see more about our everyday life, and then get to see our lives as entertainers toward the latter part of the show.”

There is also a chance that the group’s new album will be released through the program, according to its chief producer, Kim Ji-wook. The group has released only one album so far, “Twinkle,” in 2012, so fans are anxiously waiting to hear the band’s new songs.

The program is a quasi-sequel to the channel’s “Jessica & Krystal,” a reality show that featured siblings Jessica from Girls’ Generation and Krystal of f(x), which are both affiliated with SM Entertainment. After the show was well received, more artists from the agency decided to take part in reality shows.

Tae-yeon said that the members of Taetiseo have known one another for more than 10 years, so they feel like family - sisters, to be exact.

“Instead of showing anything big, the program will be all about us being natural,” said Tae-yeon.

“Since there might be some people who don’t know Taetiseo because we only released an album once, we wanted to focus more on showing a humane side rather than the professional side on stage.”

For the youngest member, Seo-hyun, filming the show was a little liberating.

“It was fun to go to an amusement park through the reality show and embellish myself how I wanted to without hiding behind hats or masks,” she said.

“Since it isn’t easy for us to do such things freely, I’m just so happy that I got this chance to share little habits or things we do often in a friendlier way.”

However, not so much about the members’ love lives will be revealed through the show.

“I don’t think I need to show every part of my private life just because [I’m on] a reality show,” said Tae-yeon, who went public about her relationship with boy group Exo’s Baek-hyun in June after a local media outlet revealed they were dating.

“The goal of doing this program is to share how we prepare for a new album, along with sharing some fashion and beauty tips that fans get curious about.”