Amid safety concerns, Koreans get prepared

Amid safety concerns, Koreans get prepared 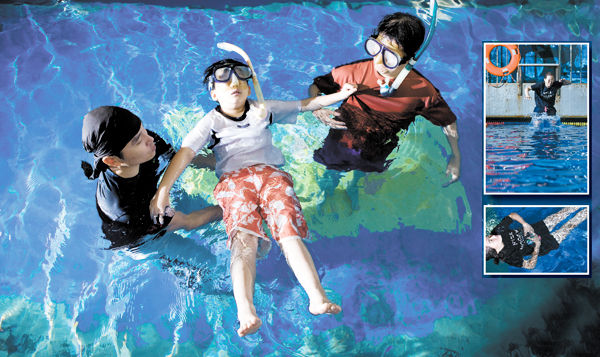 Left: Moon Chang-wuk, 10, learns how to float on his back in preparation for emergencies at Daejeon Expo Diving Center late last month. Above right: A young woman who fears water joins the class to learn how to survive in the open sea. By Kwon Hyuk-jae

A woman in her 20s stood on a diving board 1.5 meters (4.9 feet) above the ground at the Daejeon Expo Diving Center late last month.

She was learning how to survive a maritime accident after the entire nation was traumatized by the April 16 Sewol ferry disaster that killed more than 300 people, but she still had not decided whether to jump into the five-meter-deep pool or not.

“Uh-oh, wait! Oh my gosh,” she exclaimed as she missed her step and fell off the board.

The woman was part of a group that had gathered at the center to learn survival tips for various situations.

“I have a fear of water because I can’t swim,” said the woman. “I wanted to overcome my fear, so I joined this class.”

The day’s instructor, Kim Jong-do, 40, kept stressing that the participants should be “maintaining ideal postures.”

“When you jump off a ferry, you should look down at the water and press your jaw down tight with your hands. Otherwise your neck might get hurt,” said Kim.

“Another important tip is to open your eyes in the water. That will increase your chance of survival.”

This reporter also experienced how to jump into the water safely. It wasn’t easy to keep a safe posture, however, because my entire body tumbled in the air.

I succeeded to dive into the pool but breathed water through my nose and was terrified by the water pressure. I was dragged out by the instructor.

Even with these tips in mind, the instructor said the ocean is one of the toughest places to survive.

“The speed of the current is way too fast and the waves also make it hard for people to survive in the sea.

“For this reason, most people who jump off the Han River bridges die instantly.”

People who applied for the special class are members of the online web community Saengjon 21, which means Survival 21 in Korean.

For about five hours, they learned how to survive in the water without a safety jacket or artificial respiration.

Of the five participants, two had brought their children. Park Hyun-hee, 41, was there with her 9-year-old son.

Another mother, who wanted to be identified only by her surname, Moon, said, “Since I’m a mother, I’m interested in survival tips because I see disasters almost everyday these days.”

A growing number of Koreans want to be prepared for various emergencies.

The movement, which is often called survivalism, is comprised of individuals who aim to be prepared for natural disasters, environmental pollution hazards and pandemics.

After the Great Depression in the 1930s, the movement caught on with people who felt insecure about society.

Korea is no exception to this. Saengjon 21 first opened in 2010 on Daum, the nation’s second-largest web portal.

It had hundreds of subscribers the year it launched, but membership has now reached 10,000 after a series of disasters such as the Great East Japan earthquake, threats from the North and the recent Sewol ferry sinking.

Wu Seung-yeop, 41, who runs the Internet community, was not taken very seriously when he first launched the website.

“But now I can feel that people think of survival seriously, unlike in the past,” he said.

Wu published a book detailing survival tips last July, and the first edition, numbering 2,000 copies, sold out upon its release. Across about 600 pages, he gives advice on safety that applies to local situations.

For example, Wu details how to purify water using chlorine and a dropping pipette, which is available from stationery stores.

Books with similar themes have been published one after another in the last years.

In light of this, the JoongAng Ilbo has compiled tips from books and industry experts for coping with disasters and emergencies.

Here are seven disaster cases and advice on what you can do if something similar happens to you.

Strong currents swept a car from a bridge over Samgye Valley in Cheongdo, North Gyeongsang, early last month. All seven of the family members inside the car died.

An official from the Gyeongsang Fire Station, who was at the scene of the accident, said, “We found the car about 1.1 kilometers away from the bridge. The car was turned over and all the windows were broken. It was totally flooded at the time of rescue.”

In this case, it is likely that the family did not have time to roll down their windows, but this is the first thing you should try to do on impact with water.

According to survival experts, the first thing you should do is open all the vehicle’s windows as its power will shut down immediately in water, meaning you will not be able to use the electric window function.

The Seohae ferry sank in the Yellow Sea near Wi Island, Buan in North Jeolla, in October 1993.

The sinking is remembered as one of Korea’s largest tragedies as the lives of 292 out of 362 passengers were lost.

Although it is difficult, many handbooks say there are ways to increase survival in open water.

You should make sure to wear a safety jacket and tighten the lower edges of your shirt sleeves and pant hems to minimize direct exposure to sea water.

When in the ocean, open your eyes and remain still with your arms and legs crossed to keep body temperature up.

Asiana Airlines Flight 214 crashed as it attempted to land at San Francisco airport about a year ago, killing 3 and injuring more than 180 passengers.

“In case of an emergency landing, we advise passengers to keep their heads down to prevent their faces and chests from getting hurt,” said an official from Asiana Airlines who flew to San Francisco after the accident. “But we didn’t even have time to tell people to do that because everything happened in a flash.”

He continued, “If passengers successfully escape from the airplane, then they should run as far as they can away from its wings because these are the parts that contain a vast volume of oil.”

Survival books advise passengers to ditch their bags and high heels for a safer escape.

Fire broke out on the seventh floor of an apartment building in Busan last December. Firefighters tried to rescue people locked inside by the flames but couldn’t. A young mother and her two children were found dead on the terrace.

“The fire started in the kitchen and the family couldn’t escape from the house through the front door, maybe because the door was engulfed in flames,” said an official from a fire station in Buk District, Busan. “They were waiting to be rescued on the terrace.”

In this case, survival books recommend for people to jump down onto a rubbish dump if possible. When jumping, you should keep your head down and try to land on your back.

A man in his 30s brandished a knife at random people in Yeouido, western Seoul, injuring four passersby in August 2012.

Because the crime happened in an instant, pedestrians watched in shock as some people were attacked by the 30-something young man.

Lee Gak-su, 53, a professor of martial arts at Myeongji University, was at the scene and subdued the young man along with other pedestrians, until the police arrived at the scene.

“If people on the street had thrown chairs available from some open-air cafes at the man,” said Lee, “then we could have decreased the number of casualties.”

The best way to cope with these types of crimes is by leaving the scene. If this is impossible, then you should protect yourself with anything you can find in the area.

A man in his 70s set fire to passenger seats in a subway car passing through Maebong Station on line No. 3 in May.

He used bottles of flammable liquid - paint thinner - and a lighter to burn the subway car.

No serious casualties were reported.

“All subway stations and platforms are smoke-free,” said Maebong Station staff member Kwon Sun-jung, 47, who put the flames out with a fire extinguisher.

“Thus, if you find somebody who is fiddling with a lighter, he or she is highly suspicious.”

7. Disruption of law and order

When the 1992 Los Angeles riots took place, many Korean-Americans who had participated in the Korean War or had finished their mandatory military duties in Korea rolled up their sleeves and began guarding their shops and restaurants.

Shin Hyo-seop, 52, chairman of an association of Marine Corps alumni in the United States, recalled the event.

“It was a desperate situation,” Shin said.

“We called the police, but they didn’t come.”

Survival experts say if the country faces a state of anarchy, people should form a protective group to guard the main entrance of apartment buildings or houses in shifts.