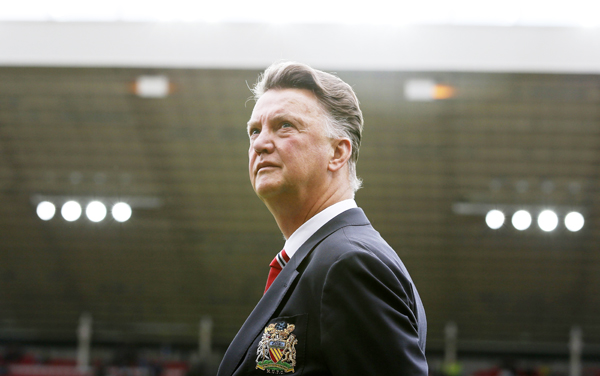 The World Cup memories are fading fast for Louis van Gaal as the size of the Manchester United rebuilding task hits home.

A week after losing the season opener, United was held to a 1-1 draw at Sunderland on Sunday, leaving the former Netherlands coach still searching for his first win in the Premier League. Juan Mata gave United the lead in northeast England, but former Manchester City midfielder Jack Rodwell headed Sunderland level on the half-hour.

“Football is played for creating chances and making goals,’’ said van Gaal, who led the Dutch to third place in Brazil. “We haven’t created so many chances today. We probably had more ball possession and were more dominant than the last match, but you have to win your game at that moment and we couldn’t, so that’s a pity.’’

Before the approach from United to replace David Moyes, van Gaal was close to taking charge at Tottenham. Instead, Mauricio Pochettino’s reign at White Hart Lane has begun with successive league wins as his team overwhelmed Queens Park Rangers with a stylish 4-0 rout on Sunday.

Whether Tottenham is a top-four contender might only become clearer when the north London club hosts Liverpool next Sunday. Before then, Liverpool plays champion Manchester City on Monday in a meeting of last season’s top-two.

United, which collected a 20th English title in 2013 before Alex Ferguson retired, seems some way away from rejoining the elite, based on the Swansea loss and Sunderland draw.

By pursuing Argentina forward Angel Di Maria, who would likely cost more than $100 million to leave Real Madrid, the United owners are showing there is money to spend, having already splashed out about $125 million in recent months.

And the first goal came Sunday from the club’s most expensive player, Mata, who joined in January for $61 million. The Spain midfielder met Antonio Valencia’s low cross from close range in the 17th minute after evading Sebastian Larsson.

But United’s frailties at the back were exposed in the 30th minute when Larsson sent a corner to the near post for Rodwell to head home. In a further blow for United, defender Chris Smalling left with a suspected groin injury that will be assessed on Monday.

“We were at times sloppy,’’ United striker Robin van Persie said. “I don’t think one point is enough because we have high ambitions.’’

Tottenham already has a maximum six points like Chelsea and Swansea, and produced the type of expressive attacking display expected when Pochettino was brought in from Southampton in May to replace Tim Sherwood.

Nacer Chadli scored the first of two goals in the 12th after bringing down Emmanuel Adebayor’s cross with his chest. Erik Lamela, the $40-million record-signing derided in his first season at Tottenham has been revitalized by Pochettino, setting up Eric Dier’s header from a corner and providing the cross that Chadli nodded in before half time.

Tottenham’s fourth came from a rapid counterattack in the 65th minute, with Danny Rose galloping down the left flank before squaring for Adebayor to side foot into the net.

“Lamela, Adebayor, Chadli and [Christian] Eriksen create the movement and rotate - they are free,’’ Pochettino said. “We work a lot on the training ground but it is important that the players are free in their minds because they are creative players.’’

In the day’s other game, Hull had to play with a man disadvantage against Stoke from the 14th minute when James Chester’s outstretched leg denied Glenn Whelan a goal-scoring opportunity. But Nikica Jelavic still managed to put Hull in front in the 42nd from a tight angle. It took until the 84th for Stoke captain Ryan Shawcross to bundle in a goal to salvage a 1-1 draw.