Microsoft’s new tablet has functions of a laptop

Microsoft’s new tablet has functions of a laptop 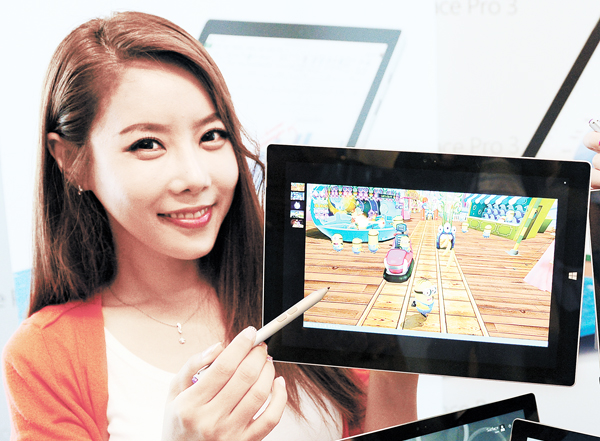 Microsoft said yesterday it will launch the Surface Pro 3 on Aug. 28, a tablet PC that can be used as a laptop, in Korea.

The company is aiming to compete with Apple in terms of hardware and to surpass Google with its software.

But its previous tablet PCs, including Surface RT and Surface Pro 2 have not been successful in the global market and have forced Microsoft to take on hundreds of millions of dollars in losses over the past two years.

However, at a press conference held at Microsoft Korea’s office in Gwanghwamun, central Seoul, the company expressed confidence in the Surface Pro 3, saying it will be competition for Apple’s MacBook Air.

The company added that the Surface Pro 3 will draw Korean consumers who want a tablet and those who are shopping for a laptop.

“We have created a tablet PC that users can experience everything they did on laptops so that they will no longer need a separate laptop,” said Cho Sung-woo, marketing manager at Microsoft Korea.

It has all the same features as a laptop, runs on Windows 8.1 and weighs 800 grams. When writing with the pen function, the smoothness makes it feel as though ink is flowing onto the screen.

“According to Microsoft survey, 96 percent of tablet users also use a laptop. This shows how much tablet PCs are limited in terms of usage,” said a spokesman for Microsoft.

“There are forecasts that the popularity of tablet PCs will naturally cool down. In such environment, Surface Pro 3, which can substitute a laptop, will become a game changer that will change the definition of a tablet PC.”

The screen is thinner and has an aspect ratio of 3:2.

“In recognition of this innovation, global companies such as BMW, Louis Vuitton and Coca Cola have adopted Surface Pro 3 to use for business. We expect that the surface Pro 3 will have a huge impact on the fastest and the most dynamic Korean market.”