Saenuri floor leader, Lee Wan-koo, left, and other party lawmakers involved in the Sewol special law talk to bereaved family members, right, of teenage victims of the ferry tragedy during a meeting yesterday at the National Assembly. [NEWSIS]

The opposition New Politics Alliance for Democracy (NPAD) yesterday signaled it could boycott both the extraordinary session of the National Assembly as well as a plenary session next month unless gridlock over the special Sewol law is resolved, raising the possibility of a total parliamentary shutdown.

As the political paralysis over the Sewol law shows no signs of being resolved, Kim Young-oh, the father of a teenager who lost her life in the Sewol sinking, continued his hunger strike from a hospital bed. Although he was checked into a hospital on Friday due to his rapidly deteriorating health from a 40-day hunger strike, Kim still refuses to eat while being given fluids intravenously.

Today is the 44th day of his hunger strike to demand the passage of a satisfactory law to investigate the root causes of the ferry’s sinking and the government’s tragically poor rescue response. Last week, Kim also requested a meeting with President Park Geun-hye.

The opposition party’s stern warning about a walkout yesterday came a day after the NPAD’s interim leader proposed to the ruling Saenuri Party a trilateral consultative body involving the two parties and an association representing the relatives of the students who died in the Sewol to find some middle ground. 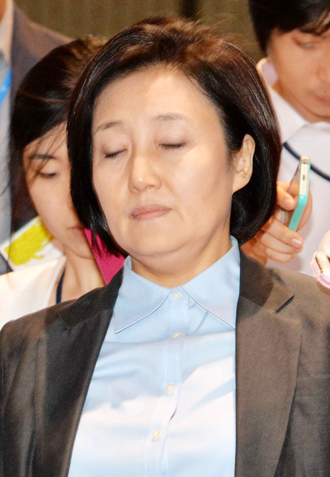 Lashing out at the ruling party for not being sincere in responding to the grievances of the relatives, NPAD interim chief Park Young-sun demanded the Saenuri accept the proposal by the end of yesterday, saying there would be no way to end the gridlock otherwise.

According to the JoongAng Ilbo, Park continued her harsh rhetoric during the meeting, saying the NPAD would “embark on a full struggle against the ruling party” if the Saenuri turned down the demand. Park’s aggressive remark was interpreted as the opposition’s willingness to put a halt to all other legislation - including bills aimed at helping the economy - in what is left of an extraordinary session and in a plenary session next month. The opposition has been refusing to pass bills not related to Sewol for weeks.

As of press time yesterday, the Saenuri still rejected the idea, saying having the victims’ families in a consultative body infringes upon the principles of representative and parliamentary democracy.

The Saenuri also pointed out that it was the NPAD that broke bipartisan deals on the law’s specifics twice, which it called a breach of political trust and principles.

The opposition said it had no choice but to renege on the deals because of the families’ objection.

“We cannot support an agreement while the victims’ families are strongly against it,” NPAD Rep. Chun Soon-ok told the Korea JoongAng Daily in a telephone interview. “The two parties and the families should seek a way to end the stalemate. The ruling party should give us some room to steer our way out of this.”

The lawmaker did not rule out the possibility of the NPAD starting street protests and boycotting parliamentary activities. “The ruling party should respond to our demand to prevent that from happening.”

The opposition’s demand to go into three-way negotiations seemed to reflect the growing sway of hawkish lawmakers within the NPAD who argue that the party should support the bereaved families’ stance on the special Sewol law.

Following the relatives’ objection to a bipartisan deal in a vote last Wednesday, moderate opposition lawmakers sought to persuade the relatives to accept the negotiated terms. But as the NPAD’s warning to the Saenuri suggested, its policy on the Sewol law seemed to be driven by hard-line lawmakers who are willing to go to great lengths to meet the demands of the families.

Under Tuesday’s agreement, the Saenuri Party would be allowed to choose two members of a seven-member recommendation committee tasked with selecting two candidates for a special prosecutor to investigate the tragedy, but only after its selections were approved by relatives of the Sewol victims and the main opposition party.

President Park Geun-hye will make the final choice on who will serve as the special prosecutor.

The families opposed the bipartisan deal because they object to the Saenuri having any say in choosing candidates for the recommendation committee for a special prosecutor. The relatives do not trust the party because they believe the Saenuri is not committed to revealing any government wrongdoings that could have led to the sinking or its bungled rescue efforts in the first few days of the accident. The Saenuri is trying to avoid a special investigation that could target presidential officials for breach of trust, the relatives say. The families do not believe that the administration will appoint a special prosecutor who will resist pressure from the Blue House.