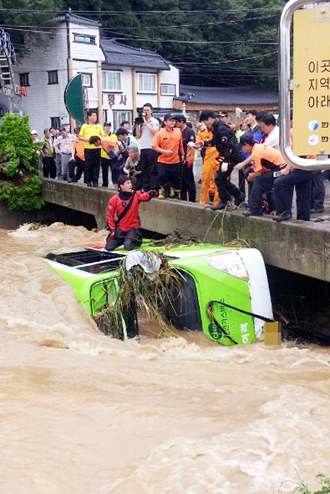 A bus swept away by a flooded river catches on a bridge yesterday in Changwon, South Gyeongsang.A drowned 19-year-old woman was found inside the bus but no more bodies have been found yet.

Torrential rain hit the southeastern part of the country yesterday, causing five fatal accidents including a bus being swept away by rainwater that killed at least one of its passengers in Changwon, South Gyeongsang.

The Changwon police yesterday reported that a bus was washed into a flooded river and was completely submerged when it hit a bridge.

“We have dispatched rescuers to the scene and are searching for additional passengers in the area by helicopters because the person who reported the accident said he saw two people trapped in the bus,” said a police officer.

Firefighters arrived at the scene and waited until the water level went down so they could get into the bus. They found a drowned woman in her 20s.

Witnesses of the accident, as well as the operator of the bus, estimated there were five people in the bus when it was washed away. Three of the passengers were rescued and two were thought to be stuck inside the bus.

No more bodies were found as of press time yesterday.

The coastal city had nearly 300 millimeters of rainfall from Sunday afternoon, which sometimes reached more than 100 millimeters per hour.

Busan was also among the cities that were hit by the heavy rain, receiving more than 200 millimeters.

A 60-year-old woman who was crossing the road fell down a slope and was fatally hit by a car that lost control in the flood.

A 57-year-old mother and her 15-year-old daughter were also found in a submerged car in an underpass in Busan. They were taken to the hospital as soon as they were discovered but did not survive.

In Busan’s Gijang County, a car carrying three women was swept by rainwater into a nearby rice paddy. Two women managed to escape the car, but a 53-year-old women in the passenger’s seat was later found dead.

Rain in the area caused a landslide from a mountain onto an apartment complex, completely destroying the complex’s center for elderly residents.

No casualties were reported from the landslide as there were no people inside the center.

The torrential rain also flooded lower parts of the city, hindering operation of its four-line subway system. The subway’s operator suspended parts of three lines after some subway stations were flooded.

Yangdeok Girl’s Middle School in Busan was also submerged up to its third story, so more than 400 students and teachers had to evacuate onto the roof on the fifth floor.

The rain was heavy enough to stop the operation of a nuclear reactor as well. The Korea Hydro and Nuclear Power yesterday manually stopped operation of the Gori-2 reactor in Busan for safety reason due to excessive water in the area.

The Korea Meteorological Administration anticipated the rain will continue through this morning.