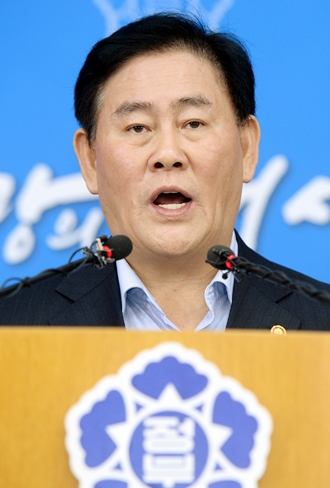 Finance Minister Choi Kyung-hwan yesterday requests the cooperation of the National Assembly during an address to the nation. [NEWSIS]

As the 19th National Assembly ground to a halt due to conflict over the special Sewol law, deputy prime minister for the economy and finance minister, Choi Kyung-hwan, strongly urged ruling and opposition lawmakers to pass about 30 pending bills related to helping the economy.

In an address to the nation yesterday, Choi said economic recovery may not materialize if the bills are left languishing.

The entire cabinet accompanied Choi while he was reading the speech.

“Our economy is losing its pulse,” Choi said. “If the bills are not passed by the 19th National Assembly and the embers of recovery are extinguished, the economy will lose its path and it will be hard to rebound.”

“If legislation of the basic national security reform bill is delayed, the government will not be able to execute the 230 billion won allocated for it,” he said.

As for revising the medical law in order to introduce telemedicine services, Choi made it clear that the government is not pushing privatization of the medical industry, which opponents fear.

After the central bank shaved 0.25 percentage point off the key interest rate on Aug. 15, bringing it from 2.5 percent to 2.25 percent, Bank of Korea Governor Lee Ju-yeol said the main reason for the cut was a pre-emptive move targeted at preventing downward growth risks from becoming real.

The governor acknowledged that the Sewol ferry accident caused a severe psychological blow to the market, much more severe that than the central bank had projected.

When Choi took office in July he emphasized conditions in the economy were much more serious than he had realized.

“The national economy is heading toward a serious low-level equilibrium trap like Japan’s lost decades,” he said, “since sluggish domestic demand is leading to low growth, low inflation and excessive current account surpluses.”

Choi mentioned the Korean economy has lost steam since the Sewol ferry tragedy in April, which discouraged consumers and companies from engaging in active economic activities.

According to Statistics Korea last week, Korean households’ incomes and spending both rose at lower rates in the second quarter. In particular, household spending grew 2.9 percent to an average of 3.2 million won ($3,148), but contracted from 4.5 percent growth in the first quarter.