In Korea, dogs finally get their day

In Korea, dogs finally get their day 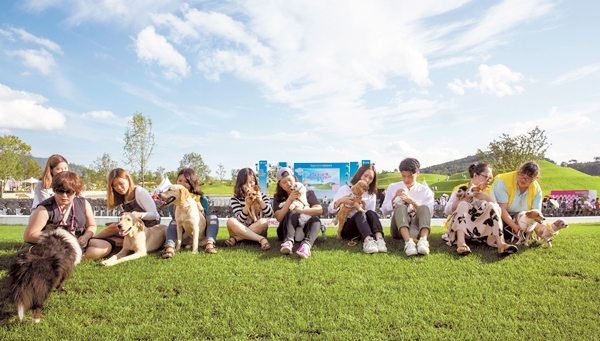 Dog owners pose with their pets at the second Animal Film Festival in Suncheon, South Jeolla, a six-day festival that ended yesterday. By Oh Jong-chan

“I give him love, unconditional love. Only death will part us. I can always trust his love. It’s unfeigned and passionate.”

This affectionate line is not from a romantic comedy, nor is it in reference to a man or a woman. Rather, it’s from a movie about a dog that was shown during the second Animal Film Festival in Suncheon, South Jeolla.

The six-day event, which ended yesterday, saw about 5,000 people swarm to the festival venue with their dogs or cats, despite the cloudy weather in Suncheon and the heavy rain across the country.

Working mother Jeong Mi-kyung, 43, from Seoul, was one dog lover at the gathering.

“Pet animals provide you with emotions that you can’t expect from people,” she said.

When Jeong’s family lost their pet dog, Zzu-Zzu, who was with them for three years, Jeong’s family wept. Her 13-year-old daughter didn’t eat all day and begged for Zzu-Zzu to come back.

“My daughter began to sleep by herself a few years after entering elementary school because Zzu-Zzu was there,” said Jeong. “When she was younger, I guess she was afraid to sleep alone, but Zzu-Zzu took good care of her. Even if I was stuck at work until late, I was not as anxious because I knew Zzu-Zzu would be by her side.”

In the past in Korea, it was often the case that people raised dogs as guards to protect their home from theft or even as food supply in an emergency. Dogs were not walked or played fetch with, instead they were tied up in one spot for life and usually ended up at a bosintang (dog-meat soup) restaurant.

But today, the lives of pets, especially dogs, are changing. They are considered life companions, family members and true friends.

The rapid increase of single-person households, together with an aging population, has contributed to more people relying on companionship from pets. According to Statistics Korea, 17 percent of the country’s population raise cats or dogs.

At the festival, a sense of camaraderie between humans was apparent as strangers engaged in casual conversation about their cats or dogs.

“Oh, look at its tail, it’s so cute,” squealed one lady. “What’s the breed?” asked another.

“Many places in Korea, especially in Seoul, don’t really like visitors bringing pets, so pet people often encounter frowns or rejection,” said Optek Hands, 35, a photographer from Seoul who specializes in taking pictures of animals. “So the pet people here seem to feel comfortable just by greeting others with their pets out in a public place.”

From left to right, dogs at the Animal Film Festival in Suncheon, South Jeolla: A golden retriever holds out its paw to a girl; Two pekinese pose for the camera; a white maltese and a brown poodle play together.

During the festival, more than 50 animal-themed films from 20 countries were screened.

Kim Min-ki, head of the production firm Fine Works, acted as the festival organizing committee’s chairman. Some of his company’s movies were shown at the event, including “Heart Is” (2006), a tale about a dog, and “Champ” (2011), a story centering on a former star racehorse.

Kim, who has a cat and three dogs, said he has long hoped to witness families and friends having fun and enjoying themselves in one place with their pets.

“I want to spread the positive effect of having your spirit purified by animals to as many people as possible,” said Kim.

Many of the visitors at the festival were in their 20s and 30s, so Jin Sun-shim, 52, was one of the oldest visitors. She said that when her daughter Kim Hee-won, 24, brought home a dog, she was not pleased.

Jin explained she had a fixed idea that dogs shouldn’t be raised inside the house but that she has come to realize that animals also “have feelings like humans.” She said she treats her dog like a daughter now.

“My daughter brought a homeless dog home right after I received a thyroid operation,” recalled Jin. “When my daughter was not home, I tried to kick the dog out. I opened the door and shouted ‘Go. Go away.’ Then the dog began to shed tears. I was shocked and felt sorry. I don’t treat her as a dog anymore - she’s my daughter.”

Jin said the dog has allowed her family to have more time together.

“My husband or children would always spend time alone in their own rooms, on their computers or on mobile phones,” said Jin, “but ever since we adopted our daughter, they all come out to the living room and we began to finally engage in a face-to-face conversation.”

Although the attitudes of many Koreans are changing, and despite the increasing number of dog owners, many public places still ban canines. Jin’s daughter Kim says there are not many cafes where she can take her dog.

“The country’s [social] environment is inadequate for living with pet animals,” said Kim. 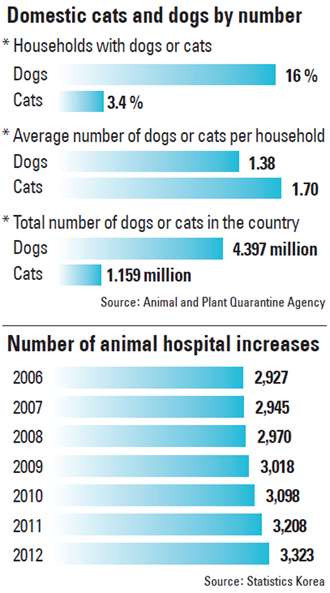 Cho Kye-jin, 36, who brought his dog to the festival with other members of a pet dog social club, agreed. “In Japan, there’s even a silver town that only allows people with dogs,” he said. “Pet animals act as a bridge connecting people to people. They are indispensable in this modern society that’s becoming more and more solitary.”

Cho added that having a dog that suits the owner’s personality will improve its owner’s life. For example, Cho said, those with quiet and mild characteristics should raise a golden retriever that’s quick to understand the owner, while active people should go for a collie as they like to run around and love sports.

“As you raise dogs, you get to talk to them, and you have to get up and go out to walk them. Plus, when you go out, you meet others with dogs and you engage in human talk as well. There’s no space to feel depressed,” said Cho.

But not all animal owners treat their pets like lifelong companions. The reality is, with the growth in the number of pets there’s also an increase in the number of abandoned animals. A major problem, according to members of the pet dog social club, is the high cost of veterinarians.

Meanwhile, Jo Hee-kyung, director of the Korean Animal Welfare Association, says it’s all about having a sense of responsibility.

“There are those abandoning dogs saying it’s a time of recession and that they have no money,” said Jo. “I believe what they don’t have is not money but an attitude of respect towards animals. We must establish a climate of respecting the lives of animals in Korea by severely punishing those who abuse or abandon dogs.”

According to Jo, in the mid-1990s, if a person was accused of physically abusing animals, he or she would be fined a maximum of 200,000 won ($196). Through numerous revisions, the latest Animal Protection Law has strengthened the punishment to a prison sentence of up to a year and a maximum 10 million won fine. Thanks to voluntary reports, the lives of many abandoned animals are being saved, Jo said.

“It’s getting better, but it’s still an ongoing problem,” said Lee Eun-ju, 28, who operates an animal shelter in Suncheon.

“I recently heard that there will be a dogfight near here, so I secretly went to see it. To my surprise, dozens of participants arrived in luxurious sedans. I don’t know how in the world those people managed to find this spot in this small village,” said Lee. “For a healthy society, I hope to see abuses against animals eradicated in the near future.”