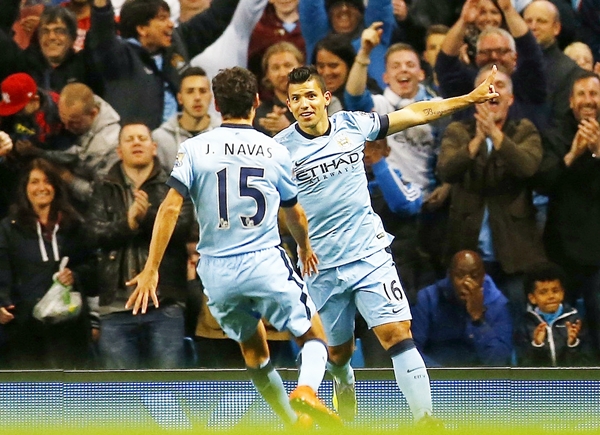 Manchester City’s Sergio Aguero, right, celebrates on Monday with teammate Jesus Navas after scoring a goal against Liverpool during their English Premier League match at the Etihad Stadium in Manchester, northern England. [REUTERS/NEWS1]

A Stevan Jovetic double and a third to Sergio Aguero helped Manchester City send out an ominous warning to those with designs on their Premier League crown, routing Liverpool 3-1 in the first heavyweight clash of the new season on Monday.

With new signing Mario Balotelli watching from the stands, last season’s runner-up Liverpool looked lively in miserable conditions at Etihad Stadium, but an error from debutant Alberto Moreno allowed the Montenegro international to smash the ball home at 41 minutes.

He grabbed his second 10 minutes after the restart, putting away Samir Nasri’s low cross, while Aguero scored 23 seconds after coming on as a substitute as Manuel Pellegrini’s side put down an early-season statement of intent.

After coming agonizingly close to winning their first league title in 24 years last season, Liverpool is desperate to mount another creditable challenge, but despite nine new arrivals they are still looking to adjust to life without Luis Suarez.

The Merseysiders failed to seriously trouble Joe Hart despite having plenty of ball and earned a consolation through a Pablo Zabaleta own goal when the result was already sealed.

“Every game we play at home against the big four teams it’s like six points and you have to make a statement,” midfielder Nasri told Sky Sports.

“It’s important. Last year Jovetic was injured and we saw in preseason he was on fire and today was a big start for him for this season.”

The prematch interest was focused on the return of the controversial Balotelli to the Premier League after a season and a half at AC Milan, having previously quit City after falling out with then-Manager Roberto Mancini.

The 24-year-old Italian appeared at ease in his old stomping ground, warmly greeting some of his old teammates before taking a seat in the stand.

On the pitch both sides looked dangerous on the break, with 19-year-old Raheem Sterling particularly lively on Liverpool’s right and giving Gael Clichy plenty of defensive work.

Spaniard Moreno, an offseason arrival from Sevilla, offered some decent balls from out wide but was culpable for City taking the lead.

Dejan Lovren, under pressure from David Silva, was unable to get any power on a clearing header, but Moreno was caught on his heels, allowing Jovetic to beat him to the ball and smash it past Simon Mignolet.

The Montenegro international struggled with injury in his first season in England, but after impressing in preseason has been given the chance to partner Edin Dzeko in attack with Aguero still working his way back to fitness.

The home fans only had to wait 10 minutes after the restart for a second, a scuffed effort from Jovetic finding the back of the net after fine lead-up work between himself and Nasri, the Frenchman finding his teammate with a low ball through the box.

Aguero made it three, having been on the pitch for 23 seconds, getting in behind the Liverpool defense and finishing off Jesus Navas’s searching pass.

The Argentina striker has now scored in both City matches, despite playing less than 45 minutes in total.

Liverpool pulled one back when Pablo Zabaleta, under pressure from Rickie Lambert, put the ball in his own goal, but hopes of a comeback were curtailed when Glen Johnson hobbled off, leaving the Reds to finish with 10 men and with an early dent in their title hopes.

“Up until they scored we were the better side,” Liverpool Manager Brendan Rodgers told Sky Sports.

“We switched off just before half time and we gave away two poor goals, really. They worked the ball well for the second one but the third was poor from our point of view. We just need to refocus and look to the weekend now.”