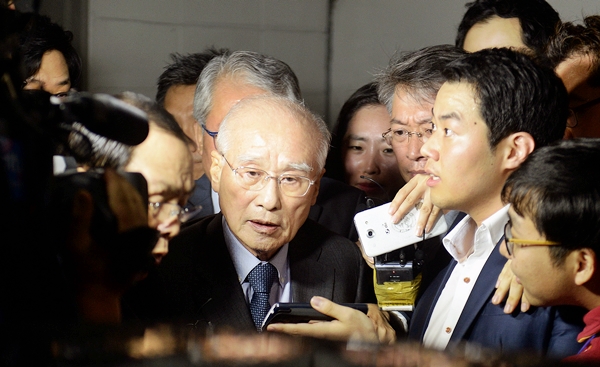 “As well as myself, I know all Daewoo members here have painful memories from 15 years ago,” said Kim Woo-choong, the founder and former chairman of Daewoo Group who attended a ceremony commemorating the disbanding of the conglomerate in Seoul yesterday.

“There were regrets and anger, but I have endured it because it was the past. However, since enough time has passed, I thought we had to correct the false information out there.”

Kim emphasized that he is not lingering in the past but wants to be judged by Daewoo’s historical work.

“I’m expecting that the truth be told clearly about whether Daewoo Group’s disbandment was right or not,” he said.

The chairman burst into tears when he emphasized that he had devoted himself only to the development of the nation’s economy and future generation.

“I never did anything against the development of the nation and future generation,” he said. “We should learn from the history we have to make a better future than the past.”

Shin, an economics professor at the National University of Singapore, released his book yesterday, which is based on talks with former Daewoo Group Chairman Kim.

At a press conference held in central Seoul, the professor said the two former government officials should take responsibility for the 1999 downfall of Korea’s second-largest group.

Lee was governor of the Financial Supervisory Service at the time while Kang was the Kim Dae-jung government’s presidential secretary for economic affairs.

Daewoo Group owned 41 affiliates and 76 trillion won ($74.66 billion) in assets, including an electronics unit, and entered into a debt workout program in 1999 after the 1997 Asian financial crisis.

Kim was sentenced to eight years in prison in 2006 after being convicted of accounting fraud. He was fined 17.9 trillion won but was given a special pardon in January 2008.

“Why did the government urge Daewoo to buy Samsung Motors?” Shin asked. He blamed them for leading Daewoo to bankruptcy by persuading it to buy the automaker.

Kim said in the book that Daewoo announced a self-help plan to secure liquidity, including donation of his private assets and collateral worth 13 trillion won in July 1999. The government promised to provide 10 trillion won for Daewoo and protect eight of its subsidiaries.

But the promise was empty words, Shin said. The government gave Daewoo only 4 trillion won a week later and made negative remarks about the group, causing financial institutions to withdraw invested funds. Daewoo suffered a more severe liquidity crunch as a result, the professor said.

To Lee’s argument that Daewoo and General Motors were dragging their feet as they kept changing terms and broke a deal in July 1998, Shin called it “groundless.”

“The government said Daewoo is incapable of developing technology itself in a confidential letter of intent sent to GM,” he said. “Why was there a confidential LOI before the open bid?” he asked.

Even though GM wanted to take over Daewoo Motors for about $6 billion, government officials intentionally blocked the deal, Shin argued.

“Daewoo Motors was handed over to U.S. General Motors almost for free while we were having conflicts with government officials over measures to overcome the Asian financial crisis,” Kim writes in the book.

“The failed deal cost the Korean economy about $21 billion, which is tantamount to the bailout size by the International Monetary Fund.”