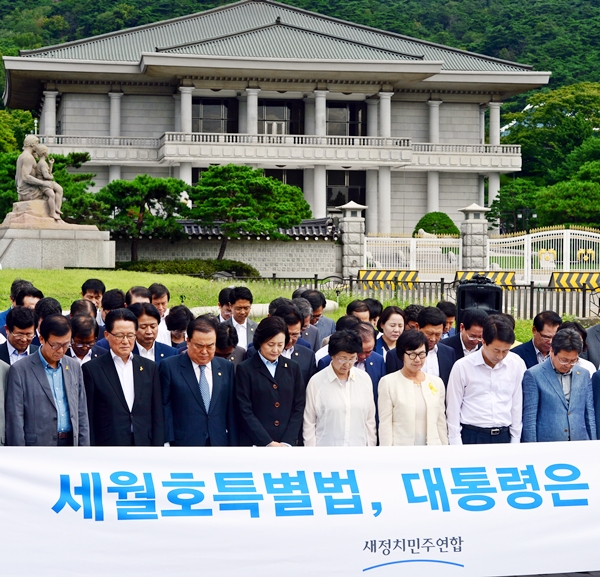 Lawmakers of the opposition New Politics Alliance for Democracy stage a rally in front of the Blue House yesterday as they begin a full boycott of the National Assembly to demand three-way talks on a special Sewol bill. [NEWS1]

Under an aggressive slogan criticizing the Saenuri and the Park Geun-hye government, opposition lawmakers yesterday held rallies in front of the National Assembly and the Blue House. They also held a sit-in protest in a conference room at the National Assembly, bringing all parliamentary activities to a halt.

“A country cannot continue on if it ignores the lives of its people. We will fight along with the people and the bereaved families until President Park Geun-hye answers our call,” said Park Young-sun, the NPAD floor leader who also acts as an interim party leader. Park was joined by 80 NPAD lawmakers in front of the National Assembly yesterday as she gave her speech.

Park, a former TV journalist, pledged to continue the boycott and the sit-in protest until her counterpart accepts her demand to have trilateral negotiations over the special Sewol law with the NPAD and an association of the victims’ families.

The opposition party, which commands the loyalty of 130 lawmakers, sent text messages telling its lawmakers to bring blankets last night to prepare for an all-night sit-in protest.

The opposition’s decision to boycott all legislative activities came after an eight-hour lawmakers’ meeting on Monday night during which hawkish lawmakers apparently led the party agenda on solving the Sewol issue, which has been gridlocked for months, even after the two parties reached agreement twice on the terms of the special law.

The NPAD back-peddled on the two compromises after families who lost teenage students in the sinking rejected the proposals.

After the bipartisan deal reached last Tuesday was rejected by the families, there were some voices from the moderate opposition side to push through the special law while trying to persuade the families to accept it. But the party opted to engage in a full boycott following the marathon, eight-hour meeting on Monday.

The Saenuri lashed out at the rival party, calling its latest move “utterly incompetent,” and urged it to return to the Assembly to pass bills unrelated to the Sewol law.

“People will shun [the NPAD] if it engages in a sit-in protest in and out of the Assembly as if it were an annual event,” said Saenuri Rep. Lee Koon-hyon.

Under last Tuesday’s agreement, the Saenuri Party would be allowed to choose two members of a seven-member committee tasked with selecting two candidates for a special prosecutor to investigate the tragedy, but only after its selections are approved by relatives of the Sewol victims and the main opposition party.

President Park was to make the final choice on who will serve as the special prosecutor.

The families opposed the bipartisan deal because they object to the Saenuri Party having any say in choosing candidates for the recommendation committee for a special prosecutor.

The relatives do not trust the party because they believe the Saenuri is not committed to revealing government wrongdoings that could have led to the sinking or the government’s bungled rescue efforts in the first few days of the accident.

The Saenuri is trying to avoid a special investigation that could target presidential officials for breach of trust, the relatives say. The families do not believe that the administration will appoint a special prosecutor who will resist pressure from the Blue House. The continuing gridlock has paralyzed all political activities.

As a result, parliamentary audits into government ministries scheduled to begin yesterday were called off and a myriad of bills the government hopes will give a much-needed boost to a stagnant economy have been sidelined. For the past 112 days, not a single bill was legislated at the National Assembly.

As the political paralysis over the Sewol law shows no signs of being resolved, Kim Young-oh, the father of a teenager who lost her life in the Sewol sinking, continued his hunger strike from a hospital bed. Although he was checked into a hospital on Friday due to his rapidly deteriorating health, Kim still refuses to eat while being given fluids intravenously.

Today is the 45th day of his hunger strike to demand the passage of a satisfactory law to investigate the root causes of the ferry’s sinking and the government’s tragically poor rescue response. Last week, Kim also requested a meeting with President Park.

During a meeting with Park of the NPAD yesterday in his room at Seoul Metropolitan Dongbu Hospital, the father, who has gone from 58 kilograms to 47 kilograms (127 pounds to 103 pounds), told the opposition leader he will eat again only when the Saenuri behaves with open-mindedness to reflect the families’ demands on the special law. After the meeting, Park also met with other families at the National Assembly.

Rep. Moon Jae-in, who was the NPAD candidate in the 2012 presidential election, is on the ninth day of a hunger strike in solidarity with the families’ cause.

There is a chance of reaching a breakthrough today as the Saenuri floor leader, Lee Wan-koo, and other ruling party lawmakers are scheduled to meet with the victims’ families at the National Assembly.