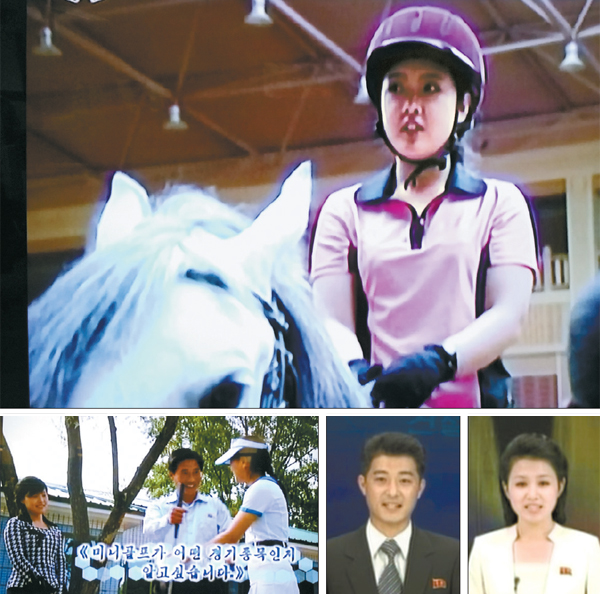 Top: A woman learns how to ride a horse on camera at the Mirim Horse Riding Club in Pyongyang; Above left: A couple talks with an instructor at a mini-golf course in the Rungna People’s Pleasure Ground, Pyongyang; Above right: New, young anchors at the KCTV no longer wear the traditional hanbok attire and wear modern suits. [Screen capture from KCTV]

North Korea’s official Korean Central Television is getting a program makeover under the dictatorship of youthful Kim Jong-un.

A recent show featured a woman dressed in a pink uniform learning how to ride horse. From her white horse, she smiles broadly and advises viewers, “If you gently kick the horse at exactly the right time and follow its rhythm, you can really enjoy horse-riding.”

Except for her Pyongyang accent, her fashion sense wasn’t much different from South Koreans.

“I will give you more tips for your development,” an instructor tells her, and stresses the importance of holding onto the reins of the horse while riding.

This is one of the modern, capitalist-style TV programs recently aired by KCTV, which would have been hard to imagine when North Korea was led by Kim Jong-un’s father Kim Jong-il or his grandfather Kim Il Sung.

In a show all about learning to play golf, a couple appears at a miniature golf course and competes against each other.

“I thought I could easily put the ball into the hole,” the husband says after losing a match to his wife. “It was much more difficult than I expected.”

A lecturer in a visor suddenly appears and instructs the viewer: “Golf is a game with a ball and a golf club. There are a total of 18 holes.”

It’s highly unusual for the regime’s official television network to produce sports programs given the fact that the official purpose of the KCTV is to promote political propaganda and the “great achievement of revolution.”

But under the leadership of the Swiss-educated, 30-something leader Kim Jong-un, the Communist regime’s official mouthpiece is showing some new bourgeois flair.

For instance, a program about world sports news is airing some soccer matches from the English Premier League or the Bundesliga, the German football league. Although the footage appears to be pirated, the host gives serious commentaries on the games using distinctly North Korean vocabulary.

A documentary series about animals is also being shown, dubbed “Animals in Various Countries in the World.”

The changes at KCTV style are almost certainly on the direction of Kim Jong-un.

He was the one who ordered the construction of a new horse riding club, called “Mirim Riding Club,” and the building of the miniature golf course at an amusement park near Pyongyang’s Taedong River. His education in Switzerland is reflected in the adoption of the classic concert programs.

KCTV, however, continues to plays its original role of broadcasting propaganda. It still promotes the Kim Il Sung family, and starts its daily programs with North Korea’s national anthem.

On Monday, it was the North Korean national holidays “Songun-jol,” the day when ex-leader Kim Jong-il started his “Songun” (military first)policy. KCTV aired a documentary about the late leader’s life entitled “The Extraordinarily Patriotic General Kim Jong-il” as its first program of the day.

Following the documentary, a 15-minute program was aired about a so-called field guidance trip by Kim Jong-un to the November 2 Factory, a bread and confectionery factory managed by the North Korean Army.

In the afternoon, KCTV continued to air programs touting the leadership of the Kim dynasty, including a documentary about the “Great Childhood of Kim Jong-un.” Out of the 24 programs it aired until 11 p.m. on Monday, five have been broadcast repeatedly.

Sometimes, the KCTV shows some surprisingly candid, unprofessional scenes. A few days ago, one program aired a report on Kim Jong-un’s visit to an Army unit and showed the leader watching a gymnastics competition among soldiers.

That was routine. But according to KCTV, the competition featured a single pair of parallel bars. A soldier appeared and made a full rotation on the bars. And the competition was over.

Even Kim Jong-un was seen laughing at the shoddy preparations for the competition, according to KCTV.

“Sometimes, KCTV airs unexpected scenes without editing them out,” a Seoul official said, “such as the bodyguards of Kim Jong-un being abruptly pushed aside by a crowd of people or soldiers.”

KCTV’s new programs are clearly for the benefit of North Korea’s ruling elite, but they show change in the world’s most reclusive state.

A generational shift in television anchors is another change. Ri Chun-hui, the female anchor who announced the news of death of late leader Kim Jong-il in December 2011, is still leading KCTV as a main anchor.

But a number of young, new faces have appeared. For sports news, an unnamed, handsome male anchor appears with a young female presenter.

The costumes of the anchors are also changing. They no longer wear the traditional hanbok dress, like Ri, and appear in modern-style suits.

Since 1999, it has been legal for South Korean civilians to watch KCTV programs at home although they cannot reproduce or distribute them to others.

But it costs a lot to install the satellite dish to receive the North Korean channel, about 1 million won.