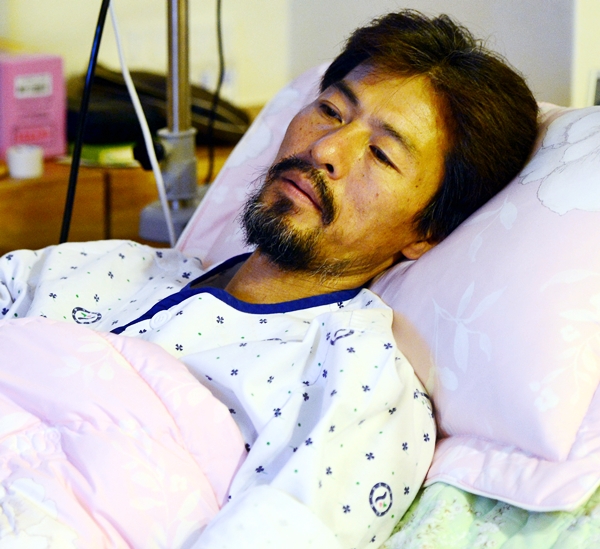 A hunger-striking father of one of the students who died in the Sewol ferry disaster yesterday vowed to take legal action against people spreading malicious news about him, including the idea that he didn’t earn compensation for the death of his daughter.

Kim Young-oh, the 47-year-old father of Kim Yu-min, a teenage girl and one of the Danwon High School students who died on the doomed ferry, will no longer let “groundless rumors” spread, his attorney said yesterday.

“[He] would never keep quiet [about the rumors],” his attorney, Won Jae-min, said yesterday at a briefing. “[He] will demand legal responsibility for spreading groundless rumors, defamations and insults.”

One of the rumors is that Kim, who is in the hospital after a 44-day hunger strike to demand a special law investigating the accident and its botched rescue attempts, abandoned his daughter before she died.

The younger brother of Kim Yu-min’s mother posted a comment on a Yonhap News article on Aug. 23 saying he couldn’t understand how Kim could demand compensation for the death of his daughter because he didn’t take care of his family after having divorced his wife 10 years ago.

“I understand the hunger strike by other relatives but I can’t understand you, Kim Young-oh, also doing this,” the comment read.

“My sister [the mother of the girl] raised the two children after your divorce for the past 10 years. You did nothing for them, just visited them once or twice a year.”

A committee of the relatives of the teenage victims, to which Kim belongs, tried to defend him.

“Kim has paid for the livelihood of his family since his divorce, including insurance fees for his children and mobile phone bills of his ex-wife and the kids,” the committee said yesterday on its Facebook page. “Although he could not do that for a certain period when he had financial difficulties, he has still continuously paid for the insurance.”

The committee posted a copy of one of Kim’s bank statements. The statement showed Kim sent money for insurance and mobile phone bills for his family in December 2013. The committee pledged to submit other records to the police later.

Another controversial rumor was that Kim enjoyed an expensive hobby, Korean archery, while not supporting his family. Kim refuted the allegation and cited an unnamed official in the Korea National Archery Association who said that it only cost 30,000 won ($29.50) per month to enjoy the hobby, not including the cost of purchasing the equipment, which totals around 300,000 won.

“We don’t have to pay additional charges for the hobby,” said a member on the Korea National Archery Association, of which Kim is a member. “It costs 10,000 won for an arrow and if you purchase about 10 or 20, you can use them for three years.”

Despite Kim’s defenses, a group of conservative activists held a rally in Gwanghwamun Square, central Seoul, across from where the relatives of the Sewol’s victims were on hunger strikes, calling for “Truth from Mr. Kim.”