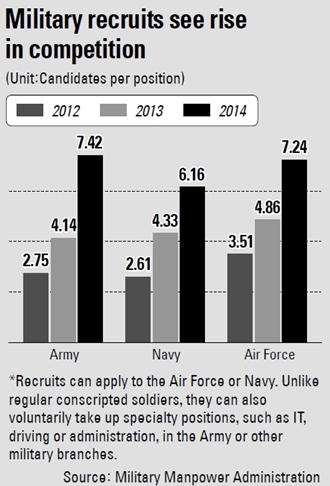 More men are volunteering to serve in the Air Force, Navy and other special branches, seeking a presumably safer and better life in the military.

Despite the fact that service in the Navy or Air Force averages 23 months, while mandatory service in the Army is 21 months, the number of recruits applying to these units has increased over the past four years.

Competition rose in the first half of this year, with the Navy accepting 1 in 6.16 applicants, and the Air Force 1 in 7.24.

Recruits can apply to the Air Force or Navy. Unlike regular conscripted soldiers, they can also voluntarily take up specialty positions, such as IT, driving or administration, in the Army or other military branches.

Despite concerns of decreasing manpower in the Army based on lower national birthrates, the Navy and Air Force have enjoyed a popularity surge. “Navy and Air Force soldiers face relatively fewer accidents, which is a factor,” said an official with the Military Manpower Administration. “Even if the period of military service is longer, this trend reflects the desires of a new generation of conscripts to serve in a good working environment.”

The trend comes amid a continuous string of violent incidents in the military earlier this year that have led to concerns over safety in the barracks. In June, an Army sergeant in the 22nd Infantry Division went on a fatal shooting spree at a general outpost (GOP) near the eastern front in Goseong, Gangwon, killing five soldiers and wounding several others before fleeing on foot.

The fatal rampage came just more than a month before the belated disclosure of the death in April of a young Army conscript in the 28th Division, who faced systematic abuse and sexual humiliation at the hands of his superiors.

However, as of August, the rate of deferral for Army enlistment has decreased from last year. In the first week of August 2013, 33.8 percent of men delayed enlistment, and that number shrank to 29.1 percent this month.

“This reflects the current situation for university students, [many of whom] have a strict schedule for returning to college, studying abroad and making other preparations for the future,” said an Army official.