LG skipper’s bullish on his pen

LG skipper’s bullish on his pen 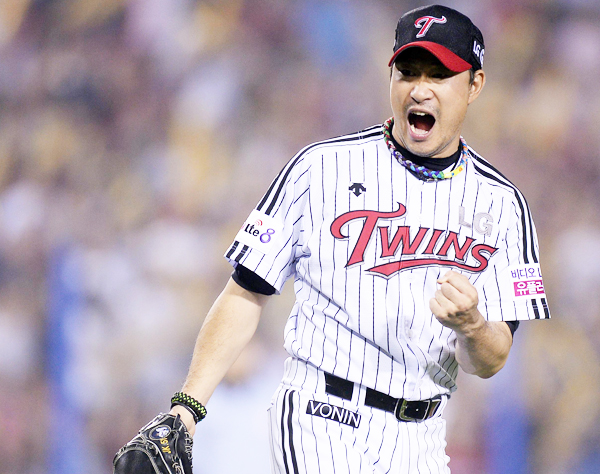 When Yang Sang-moon succeeded former LG Twins Manager Kim Ki-tae on May 11, the Seoul-based team that made it to the postseason for the first time in 11 years last season was in last place with a record of 10 wins, 23 losses and one draw.

Baseball insiders and fans saw a 2014 postseason appearance as a real long shot as the Twins had problems with pitching, hitting and underperforming new foreign players.

But three months after Yang took over, the Twins are in fourth place, two games ahead of rival Doosan Bears, with a record of 49-55-1 as of Tuesday. The Twins are 14-11 in the second half of the season and a second consecutive trip to the postseason is very much a possibility.

“What Yang tried to do was stabilize the team’s pitching,” said analyst Kim Jung-jun. “It doesn’t mean he tried to acquire someone new. He tried to give pitchers specific roles.”

“KBO teams generally don’t think about tomorrow’s game, especially in late August and September when they are in the middle of a fight to make it to the postseason,” said Yang. “They sometimes make a starting pitcher a reliever two or three days before his turn to pick up a win, which we did early in the season when our entire pitching didn’t work out well. But adjustments eventually hurt a team. So I tried to give similar situations to each pitcher whenever they appeared on the mound, so they can automatically think, ‘Oh, this would be my turn to be on the mound,’ in the middle of a game.”

He also pushed starters to pitch as many innings as possible even if they got hit hard early in a game. “It was impossible to improve both the rotation and the bullpen in the middle of the season, so I chose to improve the pen and have been trying to ease the burden on their shoulders,” Yang said.

With specific roles and fewer innings to pitch, tired relievers started to get better. The bullpen’s ERA in March and April was 5.52, but it improved to 3.77 in June, 3.29 in July and 2.80 in August. It looks like the bullpen, which was instrumental in the team’s second-place finish last year, has regained its 2013 form. The 3.40 bullpen ERA was the best in the league last season and was 4.19 this season as of Tuesday, surprisingly, also the best in the league.

Right now, the Twins’ biggest worry is the foreign players. Starting pitcher Everett Teaford (5-6/5.13 ERA) has been sidelined with a finger injury and Brad Snyder (.227/4 home runs), who replaced Josh Bell, also is sidelined with a pelvis injury. Starting pitcher Cory Riordan (7-9/3.75 ERA) has been a workhorse, but he isn’t the type of pitcher to start Game 1 of the Korean Series.

“There will be no big moves for Ryu,” said Yang. “He will stay in the rotation. He’s a 31-year-old who should lead this team’s pitching staff for the next few seasons. He should overcome his slump.”