As humans and tech evolve, so do emoticons

As humans and tech evolve, so do emoticons 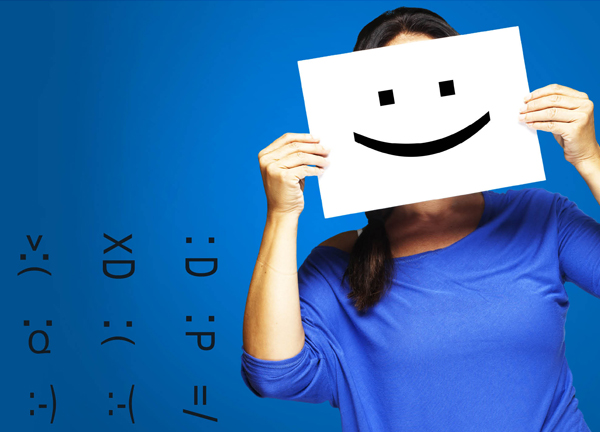 In such a fast-paced society, expressing apologies like “I’m sorry, but no thanks” or “Please understand that I’ve been busy” in just a second is tempting.

And in the world of smartphone messengers this is possible with use of emoticons - pictorial representations of facial expressions or body language.

Globally, emoticons have come a long way since :-) was first used to represent a smile in the United States in the 1980s. The same goes for Korea. Today’s emoticons, which now often come in animated form, are very different from the icons that have been around since before the age of smartphones.

The breadth of emoticons these days is why some people prefer to use them over words when expressing complex emotions or situations. The number available on Korea’s smartphone messengers is also quite astonishing. On Kakao Talk and Line - two of Korea’s major smartphone messengers, there are about 220,000 emoticons altogether.

The number of emoticon-only messages sent on Kakao Talk is also notable. The company says they amount to 15 percent of all sent messages and that the figure soars during Chuseok or Christmas.


An alternative to a period? 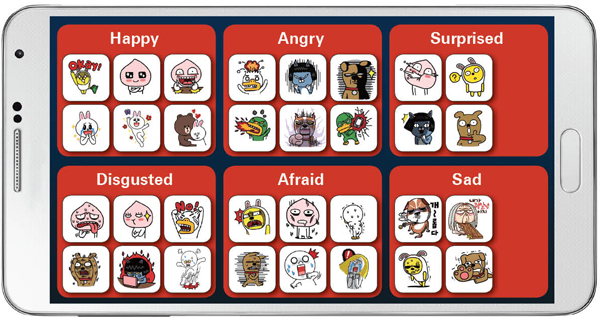 Meet Kim Mi-seong, a 35-year-old entrepreneur. She could be described as analog because she often composes handwritten letters to her business partners, but she is also an avid fan of emoticons. In her notes she uses these characters, printing them out and cutting and pasting them onto letters.

In a recent letter she wrote to congratulate her business partner on getting married, she used a Frodo and Friends character - a dog holding a bouquet of red roses.

“I started using emoticons because I felt that words sometimes cannot express how I feel,” she said. “These days I use emoticons at the end of almost every sentence, like a stop sign.”

“I feel totally comfortable using emoticons to express my emotions instead of spelling it out words,” she said.

Emoticons can also help out in relationships that can often be awkward, for instance a mother and her daughter-in-law.

Case in point: the 69-year-old Lee Yeong-sun converses with her daughter-in-law and two sons in a Kakao Talk chat room and often opts for emoticons when doing so.

“I made samgyetang, traditional chicken soup with ginseng. I tried hard, but the taste isn’t so great,” Lee’s daughter-in-law said, replacing the word samgyetang with a samgyetang emoticon. “Chickens taste the same. Don’t beat yourself up,” Lee replied using a chicken emoticon.

There are characters that express all kinds of meaning in Korean emoticons. Think Mickey Mouse. There’s a happy Mickey, a sad Mickey Mouse, a frustrated Mickey Mouse and so on.

On KakaoTalk, there are around 700 similar characters, with each displaying nine to 24 emotions each. On Line, operated by Korea’s top web portal Naver, there are about 5,600 characters, and each expresses some 40 emotions.

By now, it may be safe to say that emoticons on Korea’s smartphone messengers have emotions as diverse as humans. For instance, happiness can be expressed by degree - from a hint of contentment to extreme enthusiasm.

The emotions shown by these small icons have also become richer lately, as movement and sounds have been added.

In fact, emoticons have emerged as must-haves for women in their 30s and 40s who feel like it’s fashionable to pay for emoticons.

Lee Yu-kyeong, who runs a marketing firm, says at first she only used free emoticons but that she later found herself buying them.

“As I sought prettier emoticons, I found myself buying one emoticon after another,” she said. “The emoticons I buy cost around 2,000 won ($1.96) each. I buy one or two new emoticon every month.”

On special occasions, for instance during World Cup season when event-specific emoticons are available, she ends up buying even more.

“You look sensible when you use emoticons that are suitable for the occasion,” she said. “Of course, I end up not using some of them as much as I thought I would.”

Yuk Hywang, a 40-year-old woman who runs a Korean restaurant in Japan, also spends about 10,000 won every month purchasing emoticons. On her smartphone there are about 117 paid emoticons, including Japanese characters like Hello Kitty, Crayon Shin-chan and Doraemon. She says that when she delivers negative feelings such as frustration, “a cute emoticon can reduce negativity.”


How it all began

Emoticons that are close to what we use today probably trace back to Carnegie Mellon University in 1982, when faculty member Scott Fahlman suggested the use of the emoticons :-) and :-), specifically suggesting that they be used to express emotion an online computer science discussion board.

Even today, the emoticons :-) and :-( are still used, but mostly in the United States rather than in Korea.

Koreans prefer ^^ for a smile. Japan, meanwhile, may be close to Korea, but the Japanese prefer to use ^-^.

Masaki Yuki, a behavioral scientist at Hokkaido University in Japan who examined cultural differences through facial emoticons in a 2007 report, said that while Americans consider a display of teeth a smile, its signified in Japan with half- moon-shaped eyes instead.

Some experts say the popularity of emoticons has its roots in the natural instincts of humans that can be traced back to pictorial language such as hieroglyphics. Linguists say that between 50,000 B.C. and 100,000 B.C., humans created spoken language to supplement the linguistic pictures that can be found on murals in caves. 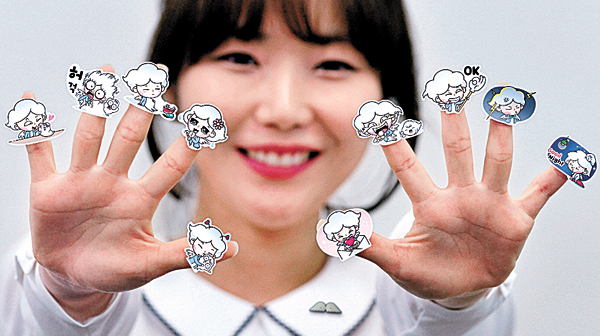 Tong Yang Life Insurance recently released a white angel character with 12 different expressions, which has been downloaded 800,000 on Kakao Talk. Provided by the company

Kwon Sun-ho, a 38-year-old character maker, says the most important factor when creating emoticons is “highlighting people’s emotions in conversations.” Kwon, whose pen name is Hojo, is considered one of the best in the web cartoon industry. He drew the cover of Psy’s Gangnam Style album in addition to creating the Kakao Friends characters.

Other experts in the industry say “exaggeration and simplification” are key to succeeding in the smartphone character and emoticon business. For instance, an emoticon for anger has angry eyes with overturned eyelid and stretched-out arms, but the body below the chest is omitted on purpose.

As more and more companies see business potential in smartphone characters and emoticons, they recruit web cartoonists and develop emoticons of their own.

Kakao Talk officials say that at least 180 Korean companies use emoticons for marketing and PR. But its not just businesses - anybody can produce and distribute smartphone characters and emoticons.

Last month, Line began operating a “Creator’s Market” where anybody can create and upload emoticons. In just a month, about 700 people subscribed and around 100 characters were uploaded.

However, some experts point to problems in the industry. In the cases of Kakao Talk and Line, the messenger operators take half the profits from the emoticon business, which could discourage creators.

Meanwhile, Kakao Talk and Line are expanding their presence offline. Both have opened shops in department stores selling various products related to their most popular emoticons,

The Line store in Myeong-dong, central Seoul, sees a 15 million won profit a day with Chinese tourists flocking to the store. Kakao joined forces with Samlip Genera Food early this month, releasing bread with a Kakao Friends design on its package.

“Emoticons, which stimulate a host of emotions, have much usage not just in the corporate world but in psychoanalysis and psychotherapy, among others,” said Choi Seung-won, a psychology professor at Duksung Women’s University.