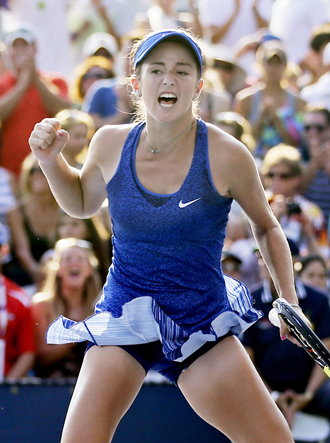 While 15-year-old American CiCi Bellis was in the process of stunning a Grand Slam finalist to become the youngest player to win a U.S. Open match since 1996, her father did his best to conceal his emotions courtside.

Like many a teen, CiCi has strict rules for dad in public - even if his 1,208th-ranked daughter is pulling out a back-and-forth 6-1, 4-6, 6-4 victory Tuesday over 12th-seeded Dominika Cibulkova in the first round at Flushing Meadows.

“I’m told I cannot sigh and I cannot move or say anything [because] that distracts her, so I just have to sit there like a Sphinx and just smile and pray,’’ Gordon Bellis explained with a deadpan delivery. “She hears me when I sigh. So I can’t sigh.’’

Ah, yes, the joys of raising kids. And make no mistake, Bellis is a kid. She is home-schooled and about to start 10th grade. Her first memory of the U.S. Open is watching it on TV while Maria Sharapova played. She likes to hang out at the mall with friends back home in California. Asked whether she’s a fan of pop star Justin Bieber, Bellis answered, “I used to like him when I was younger, a couple years ago.’’

Her victory was the most surprising of the afternoon session on Day 2 of the year’s last Grand Slam tournament. Another American teen, Taylor Townsend, was set to face two-time defending champion Serena Williams at night, after Roger Federer played Marinko Matosevic.

Aside from the Williams sisters, American tennis fans have not had much reason to cheer for their own in the latter stages of major tournaments in recent years. That’s why the occasional run by a young U.S. player - think Melanie Oudin, wearing “Believe’’ on her sneakers in 2009 - stirs interest at Flushing Meadows.

“Believing was the No. 1 thing that I had to do today,’’ said Bellis, whose nickname CiCi is derived from the initials of her first and middle names, Catherine Cartan. “That’s what my coach told me before the match also: Just go out there and believe that you can win.’’

But on Tuesday, there she was in front of a supportive crowd on Court 6 at Flushing Meadows, taking it to Cibulkova, the runner-up at the Australian Open in January.

“I went into the match thinking it was going to be such a great experience,’’ said Bellis, whose rapid-fire sentences tend to finish with a gurgle of laughter, “but I never thought I would come out on top winning.’’

Neither did her parents. Her mother, Lori, didn’t attend the match because she gets too nervous watching in person, Gordon Bellis said. So Lori stayed at their hotel, getting updates via text from Gordon.

“She asked how bad it was going in the first set. And so I told her [CiCi] actually won the first set. She couldn’t believe that,’’ Gordon said. “We were just thankful that she didn’t get double-bageled. That was the first objective.’’

After trailing 3-1 in the third set - “kind of a bummer,’’ Bellis would say later - she came back to even things, then broke the 25-year-old Cibulkova in the final game. When it ended, Bellis crouched at the baseline and pumped her fists, then ran over to the stands for congratulatory hugs.