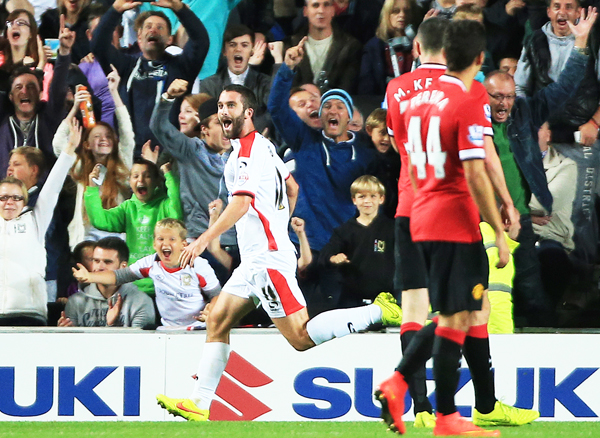 Di Maria has signed a five-year contract, the Premier League club announced on their website, with the fee breaking the British record of 50 million pounds Liverpool received from Chelsea for Spain striker Fernando Torres in 2011.

Di Maria said: “I am absolutely delighted to be joining Manchester United. I have thoroughly enjoyed my time in Spain and there were a lot of clubs interested in me, but United is the only club that I would have left Real Madrid for.

“Louis van Gaal is a fantastic coach with a proven track record of success and I am impressed by the vision and determination everyone has to get this club back to the top - where it belongs. I now just cannot wait to get started.”

Van Gaal added: “Angel is a world-class midfielder but most importantly, he is a team player. There is no doubting his immense natural talent.

“He is a tremendously fast and incisive left-footed player who puts fear into the most accomplished defense. His dribbling skills and his ability to take on and beat opponents are a joy to watch. He is an excellent addition to the team.”

Di Maria remained crucial to Real Madrid even after the world-record signing of Gareth Bale last year and thrived as an often unheralded yet crucial cog in the team that won La Decima - their long-awaited 10th European Cup title.

However, the high-profile close-season signings of James Rodriguez and Toni Kroos prompted the 52-cap Argentina international to reject a new contract at the Bernabeu.

A new role awaits in England where Di Maria must cope with the pressure of returning a wounded United, which has taken just one point from their opening two Premier League games, back among the elite of European football.

Di Maria’s career started out at Rosario Central with the Argentine club’s renowned youth academy and moved to Benfica in 2007.

Real paid the Portuguese club 20 million pounds for his services in 2010 and the winger was a part of the team that triumphed in Europe last season.

However, the 26-year-old fell out of favor and was omitted from the squad for the Spanish Super Cup last week.

Di Maria looked strong in preseason after suffering a thigh injury in the World Cup quarterfinals that forced him out of the tournament.

Despite that injury he was put on FIFA’s 10-man shortlist for the player of the tournament award.

MK Dons’ Will Grigg and substitute Benik Afobe scored two goals apiece as United’s defensive frailties were ruthlessly exposed by their enthusiastic lower division opponents who took advantage of playing against a second-string side.

Grigg capitalized on United’s mistakes to score either side of halftime before Afobe compounded the visitors’ misery with two late goals.

It was United’s first outing in the second round of the competition since 1995 and the first time they had conceded four goals in a League Cup match against lower league opposition.