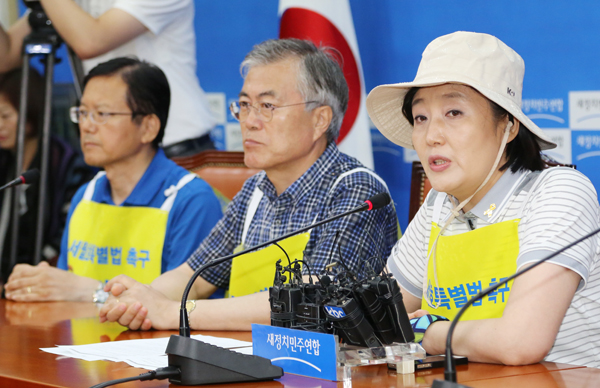 When most of a mother’s attention is focused on her newborn baby, and the woman’s 5-year-old child, who has been developing normally, suddenly begins to suck on milk bottles, the psychological term is called “regression.”

The New Politics Alliance for Democracy’s latest moves are reminiscent of that 5-year-old sucking on a milk bottle. On Tuesday, about 80 members of the opposition party held a rally urging the passage of the special Sewol law at the National Assembly, moving to the Blue House and then to Gwanghwamun. It is practically the beginning of an outside struggle.

They are holding a sit-in at the National Assembly’s Special Committee on Budget and Accounts meeting. Moon Jae-in and other hardliners have joined the hunger strike. These scenes are repeated every year. It is now meaningless to ask them what they mean by “new politics.” With Kim Han-gill and Ahn Cheol-soo now gone, the opposition party is going back to what the old Democratic Party was.

It is easy to go out of the National Assembly, but difficult to have a justification to come back. Nevertheless, the party’s decision to go the way of struggle is a sort of regression. After its defeat in the July 30 by-elections, the party is in a panic. They are anxious and fear the reality that the voters judged the opposition party, not the Park Geun-hye administration that let more than 300 people die in the water. What will happen in the 2016 general election if the opposition party cannot win, even after one of the worst national disasters struck the ruling administration? Will it be able to win in the 2017 presidential election? The crisis is serious, but it doesn’t have a solution. And the lawmakers seem to be looking for the milk bottle subconsciously.

The New Politics Alliance for Democracy has many lawmakers who have experiences in the struggle, from the anti-Yusin demonstration in the 1970s to the student movement in the 1990s. Struggle is a familiar method and the root of their existence. So they subconsciously think that the enemy should be toppled, not negotiated with. They usually follow the rules of parliamentary democracy, but will go back to their old habits when they lose mental balance.