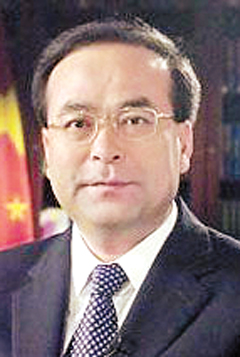 Sun Zhengcai, the Chongqing Communist Party leader who is considered a possible candidate for China’s next president, will attend a business forum among Korean and Chinese companies in Chongqing on Monday.

According to the Federation of Korean Industries (FKI), which is an organizer of the event, it will be the first time the party leader has participated in the forum since taking office in November 2012.

Sun, who was born in Shandong Province, is an expert in agriculture. He became the country’s minister of culture in 2006. In 2009, he was made Community Party chief of Jilin Province, which is where China grows the majority of its grains.

Since being appointed Chongqing Party chief, he has been in charge of a development project in China’s west that is being pushed by President Xi Jinping.

FKI and GS Group Chairman Huh Chang-soo will be asking for investment from Chinese companies to establish a Korea-China economic cooperation zone on the west coast at Saemangeum, which was also discussed during Xi’s visit to Korea earlier this year.

“Chairman Huh has put much effort into Sun’s participation in the forum,” said an FKI official. “We expect specific investment decisions from Chinese companies will be made [at the forum].