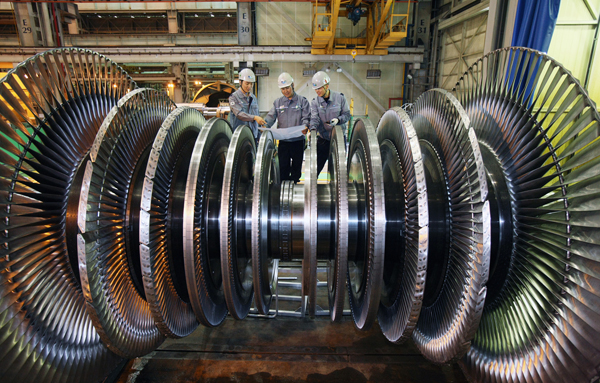 Workers examine a turbine at a Doosan Heavy Industries’ plant in Changwon, South Gyeongsang.Provided by Doosan

While Doosan Group continues to expand internationally, the company is also working hard to strengthen its fundamentals such as improving the quality of its products. The company has been acquiring the technology and systems needed to compete with other leading international companies in the global market.

Doosan Heavy Industries and Construction, the largest affiliate in the group, made a breakthrough recently by applying information and communication technology (ICT) to its plants. The company established a software center in its Seoul office in April following the opening of a remote monitoring service center (RMSC) for power plants in January. The two new centers will collect data from Doosan’s plants. The data from the plants will then be analyzed to improve efficiency.

RMSC, located in Changwon, has an analysis system that predicts failures in machinery, an early warning system for identifying abnormalities and a real-time monitoring system. The data is continuously transferred through an exclusive network so that workers can react to any problem as quickly as possible. The software center collects the massive data gathered from RMSC and processes it to enhance the layout of the plants, efficiency of their operations and the maintenance of their equipment and service.

Despite last year’s harsh economic conditions around the world, the company received many opportunities to show its competitiveness around the globe, such its 1.6 trillion won ($1.5 billion) contract with the Vinh Tan thermal power plant in Vietnam. It also won the seawater desalination plant project in Escondida, Chile. These contracts are significant for the company as its international businesses were mostly located in the Middle East. The company will use these opportunities to expand further into the international market.

The company’s domestic performance was also remarkable. It recently signed a contract worth 850 billion won to supply boilers and turbines for Boryeong Thermal Plant Unit 1 and 2.

As the international economy continues to stabilize, the company plans to diversify its products and lower their prices by developing better technology.

Doosan Infracore, the machinery maker, is working to improve its business structure in order to increase its profitability in the international market. Doosan will focus on making two major changes: introducing strict quality control and providing better communication with their consumers. The company will train local dealers in major market such as China to respond quicker to clients’ needs overseas.

Doosan Infracore plans to establish a competitive mass production line for its G2 diesel engine for further price superiority. Doosan’s own G2 engines replaced the Japanese engine used in Bobcat machines as well as Doosan’s forklifts, reducing cost and stabilizing supply. Bobcat, a farm and construction equipment maker under Doosan Infracore, built a research and development center to advance its technology. The company invested 20.3 billion won to build a research center and testing facilities in its Bismark plant in North Dakota. The company expects to cement its strong position in the global construction equipment market with new products featuring advanced design and function.