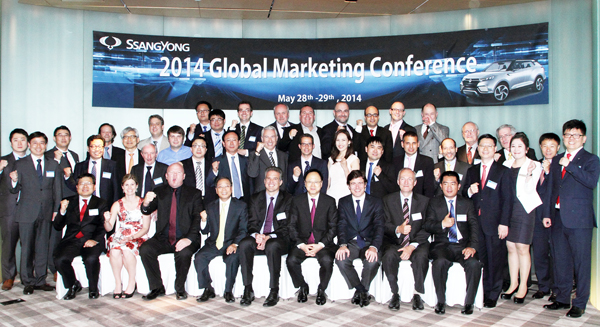 Ssangyong Motor’s strategy for success in the global market is to diversify the range of its consumers. Currently, its overseas sales are concentrated in Russia and Central and South America. Its sales in both the domestic and international market have been constantly growing. To keep up with its global performance, the company plans to expand to China, India and Western Europe.

The automaker is confident in competing with European cars as its products received a positive response from the European market. Rexton W was named the world’s second-best sport utility vehicles among all off-road SUVs in a driving test conducted by Auto Bild Allrad, a German magazine specializing in SUVs. In addition, the Korando Commercial, a van version of the new Korando C that is only available in the United Kingdom and Ireland, was also selected as the 2014 Continental Irish Commercial SUV of the Year by Motoring Writers Association in Ireland.

The company expects to sell 81,500 cars in the overseas market this year. It is a noteworthy number compared to the sales in 2010, where 49,288 cars were sold in the foreign market. So far, 41,000 cars were sold overseas, which is a 2.1 percent increase from last year’s sale in the first half of the year.

One of SSangyong’s major tactics to get settled in a new market is to localize. The company’s SUV model Actyon was modified and released under the name Nomad in Kazakhstan. It is tailored to suit local driving conditions and consumer requirements. The CKD plant in Kostanay is the first car assembly facility in the country. The automaker can use this plant react quickly to demand in Central Asian countries.

The company held a test-driving event for Chinese drivers this year to celebrate its 60th anniversary. Seventy participants from local dealers and the media participated in the event and drove to 11 cities. While driving a total of 2,694 kilometers (1,674 miles), the drivers went through various terrains, different weather conditions and experienced a variety of cultures.

In addition, Ssangyong hosts the Global Marketing Conference each year to invite individuals from the business community and discuss the future of the car industry.

“We will continue our vigorous marketing in the global markets and expand further,” said a Ssangyong Motor official.