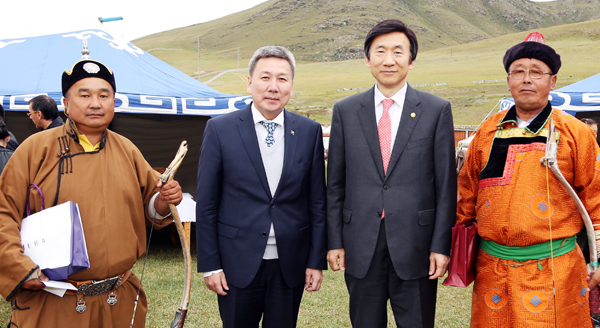 Korea and Mongolia agreed to set up their first ministerial-level consultative committee to discuss bilateral issues and economic cooperation, as well as to bolster their comprehensive partnership ahead of the 25th anniversary of the establishment of diplomatic relations next year, according to the Ministry of Foreign Affairs here.

Yun was on a three-day official visit to Mongolia, which concluded yesterday.

Additionally, Elbegdorj said he supported the proposal for a consultative channel on nuclear safety in Northeast Asia.

Yun conveyed to the president his hopes that Mongolia, “as a country that succeeded in its regime transition, will share its experience with North Korea,” to which Elbegdorj communicated a willingness on Mongolia’s part to induce change in Pyongyang and help to curb the North’s nuclear program.

Mongolia is a strategically significant country in Eurasia.

President Xi Jinping held a summit on Tuesday with Elbegdorj, the first visit by a Chinese president to Ulaanbaatar in 11 years. Japanese Prime Minister Shinzo Abe paid an official visit to the country in March, and Russian President Vladimir Putin will take a trip to Mongolia next month.

On Tuesday, Yun also met with Prime Minister Norov Altankhuyag and held talks with his Mongolian counterpart Luvsanvandan Bold on fostering the two nations’ comprehensive partnership, which was established in 2011.

Along with establishing regular meetings for a newly formed joint committee, the two ministers agreed to boost high-level exchanges and host commemorative events leading up to next year’s celebrations to mark the establishment of diplomatic ties in 1990.

They also agreed on the need to expand the role of Korean companies in developing resources and building infrastructure in Mongolia, Seoul’s fourth-largest trading partner.