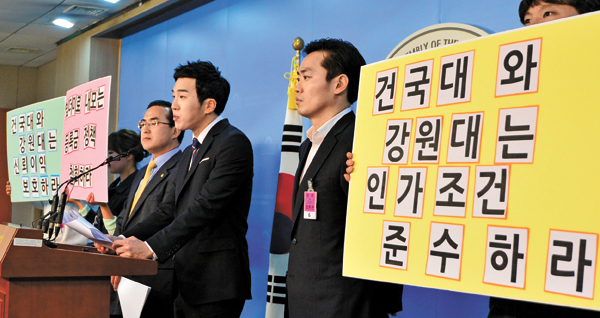 For the past three years, Kwon, a 27-year-old with a law degree from a university in Seoul, has been preparing to take the bar exam - an open test to become an attorney that will eventually be phased out here and be replaced by a Western-style law school system.

Kwon lives in a “gosichon” in Sillim-dong, Gwanak District, southern Seoul, the mecca for those bar exam hopefuls who can study for the test while living cheaply.

Many of his friends have actually have gone on to attend three-year law schools, introduced in 2009, to become licensed attorneys, but for him, it’s simply unrealistic.

Getting accepted into a law school is tough enough - it requires top-notch grades and qualifications - but the expensive tuition is also a major hurdle. That’s because becoming a lawyer in the new law school system can cost more than double what it took to take the old bar exam. 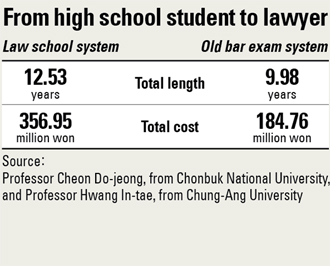 “With 5 million won, you can take a yearlong bar exam preparatory class,” Kwon said. “It’s not that I’m that bad-off financially, but I don’t have the option to finance law school for three years, which costs more than 60 million won.”

In Korea, the new three-year Western-style law school system went into effect in 2009. This system will gradually replace the old rote-based bar exam, with the last test set for 2017. Those who passed the old bar exam then went on to attend two years of mandatory training at the government’s Judicial Research and Training Institute before becoming lawyers. Under the former system, anyone - regardless of education - could take the bar exam.

Law school graduates are also required to take the new bar exam, though it is less competitive taking into account their schooling.

On average, tuition for new graduate-level law schools costs 10 million won ($9,860) annually for state-run schools and 20 million won for private schools. The dueling trajectories are illustrative of the controversy surrounding the new system, which experts argue favors those who can afford the increased tuition rates and high cost of living. And while the new system does open doors for those with diverse educational and working backgrounds, it also largely discourages those who can’t pay such large bills.

On Tuesday, a research team led by business administration professors Cheon Do-jeong, from Chonbuk National University, and Hwang In-tae, from Chung-Ang University, presented their dissertation analyzing the lawyers produced under each system.

According to Cheon and Hwang’s data, it costs an average of 22.17 million won annually over 4.77 years, from entering law school until becoming a lawyer. The law school system costs a total of 105.79 million won.

By contrast, the old system of taking the national bar exam cost an average of 9.32 million won annually over the course of 6.79 years, including completing training at the Judicial Institute. The whole process amounts to 63.33 million won in total.

Because his school’s scholarship fund decreased from 75 percent to 40 percent this year, he is no longer eligible to receive 8 million won in scholarship assistance annually, which amounted to half of his yearly tuition.

“My parents are not in a situation where I can ask them for money, so I need to earn my school tuition and living expenses through tutoring,” he said. “But it’s a vicious cycle because it takes away so much time, so my grades keep falling.”

As a group, the students refused to pay tuition for their second semester earlier this month, claiming the school violated the terms of its establishment through slashing scholarship funding, among other reasons.

According to data submitted by 13 of 25 total law schools - including Ewha Womans University, Konkuk University and Kyungpook National University - to Rep. Kim Jae-yun, from the minor opposition Unified Progressive Party, five schools had a deficit of 22.6 billion won between 2009 and 2011.

The situation was tougher for these “mini-law schools,” with less than 80 students enrolled in classes.

“If things continue this way because of budget deficits, the law schools will either be dissolved or voluntarily give up,” said Shin Hyun-yoon, former dean of Yonsei Law School.

Law schools have decreased average scholarship funding each year, according to the Ministry of Education, setting aside 47 percent in 2009 to just 38.2 percent last year.

There is also criticism about a mismatch in scholarship funding. Because truly poor students cannot handle such high tuition fees, they often give up on law school, while students who come from comparatively well-off families end up with the scholarships.

“Over 50 percent of scholarships should be going to enrolled students who come from financially difficult backgrounds, but it is difficult to find such students,” said a law professor based in Seoul.

A disgruntled 25-year-old finance student from Chungnam National University added, “Law schools are said to be drawing up our university’s budget, and there is concern that the money that should be used to benefit the other graduate schools and their students is being taken away by comparatively well-off law students.”

However, at the same time, the legal arena has become more diversified since the new law school system produced its first batch of graduates.

The most notable change is in the backgrounds of law school graduates, who come from specialty backgrounds or have work experience. Bae Geun-jo, 38, for instance, worked for three years researching semiconductors for LG Electronics.

Since graduating from law school, he now works as a corporate consultant dealing with contracts on cutting-edge technology.

“My previous experience and knowledge gained on-site from my previous job is proving an advantage for me currently as a lawyer,” he said.

According to the Korean Association of Law Schools, of the 12,353 law school students enrolled between 2009 and 2014, 53 percent, or 6,551 students, studied majors other than law, including business, engineering and the arts.

But despite the new system opening up opportunities for a few individuals like Bae, who hadn’t previously considered law, analysts remain concerned that the cost of law schools will ultimately bar opportunities for many others. And because of the over-saturation in the legal market, wages for new attorneys are also shrinking.

“The [old] bar exam will be abolished by 2017, but there are many problems surfacing in the new law school system,” said We Chul-han, president of the Korean Bar Association. “There needs to be a comprehensive plan on how to train legal professionals.”