Sinkholes are here to stay

Sinkholes are here to stay 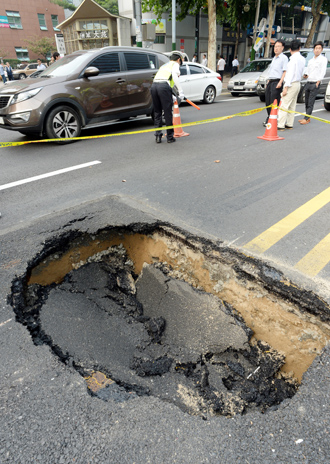 A van sank into a hole when part of road near Gyodae Station in Seocho District, southern Seoul, caved in on Aug. 22. [NEWSIS]

Amid heightened threats of sinkholes in Korean cities, the Ministry of Environment said the potentially hazardous formations were caused by burst sewer pipes and subsequent soil erosion.

The announcement followed a series of discoveries of large underground air pockets across the country - most notably an 80-meter (262-foot) empty pocket near Seokchon Station, southern Seoul.

The public is more nervous about safety concerns since the Sewol ferry disaster, attributed to shoddy inspections, and the botched rescue attempt by the government.

Among the 70 sinkholes discovered between January 2012 and last month, 53 were caused by ruptured sewer pipes.

When pipes break, water and sewage leaks out and ground soil makes its way into the pipes. The withdrawal of the soil opens up a hole.

The Ministry of Environment announced yesterday that the sewage lines that stretch 10,629 kilometers (6,604.6 miles) held 446,997 tons of soil accumulated inside. The ministry assumes the dirt seeped in over a 10-year period.

Natural sinkholes occur where limestone is within a few hundred feet of the land’s surface, but that is not the problem Korea is facing.

Its chasms are more directly linked with the mismanagement of aging sewage systems.

“In Sichuan, so-called karst areas basically hollowed out a hole that swallowed 11 buildings,” he continued, “so it was more of a natural disaster. In Korea’s case, it’s within humans’ ability to prevent the phenomena.”

Even though Korea’s sinkholes should be manageable, there is no systematic method of monitoring the state of subterranean earth formations.

Compounding the matter is that Seoul’s sewage system is old and worn-out. About 70 percent, or 7,517 kilometers, of Seoul’s entire 10,297-kilometer sewage system is more than 20 years old. It is widely believed that the life span of sewer pipes is 20 years.

Other regions appear to be in better shape than the capital city, with the share of more than 20-year-old pipes being approximately 30 percent in those cities.

“As Seoul’s population doubled in the 1960s, the Seoul city government put more emphasis on water supply than sewer systems,” said a source from the Seoul Metropolitan Government.

“This is why older pipes were not replaced with new ones.”

Lee Tae-hyung, a researcher at the Korea Infrastructure Safety and Technology Corporation, echoed the concerns.

It is extremely complicated to manage underground pipelines. Beneath the ground lies a tangled web of sewer pipes, gas and power lines, all of them surrounded by underpasses and Seoul’s vast subway system.

So far, underground inspections were centered on gas lines since a gas explosion in Ahyeon-dong, central Seoul, wreaked havoc in 1994, killing 12 and injuring more than 100.

The government has collected data on the state of the underground gas pipeline system, but it didn’t keep track of geological conditions underground.

At the center of concern is Songpa District, southern Seoul, where a total of seven sinkholes were found.

The Seoul city government blames construction carving out an underground tunnel to make way for an extended section of subway line No. 9.

The construction company has employed a Shield Tunnel-Boring Machine (TBM) to excavate.

But some geologists said that the city government should have been more alert when choosing the construction method.

Some parts of Jamsil-dong in Songpa District were reclaimed in the 1970s. Following the reclamation, the region has more sand and gravel than typical underground terrain.

“When the earth is more sandy, it can be easily exposed to heavier soil erosion,” said Lee Soo-gon, a civil engineering professor at the University of Seoul.