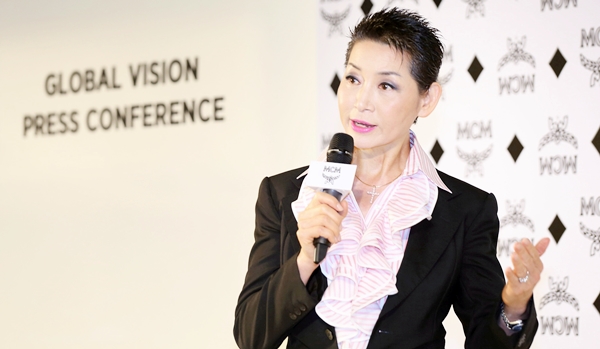 Kim Sung-joo, chairwoman of Sungjoo Group, which owns MCM, talks about the company’s aim of achieving 2 trillion won (1.9 billion dollar) in sales by 2020 yesterday at the head offices of MCM. Provided by MCM

To increase its number of stores from 300 to 450 in six years, MCM will open about 20 stores in 10 countries by the end of this year, including the Maldives, Thailand, Greece and Bahrain. It’s an aggressive move for a luxury bag maker, especially since global giants Louis Vuitton, Gucci and Prada have all seen their sales drop in the first half of this year.

MCM, however, expects to earn 700 billion won this year, a 40 percent increase from a year ago when it earned 500 billion won. About half of its sales come from overseas stores.

The brand originally began in Germany, but it was acquired by Sungjoo Group in 2005. The group sold MCM-licensed products in Korea before that.

“We want to lead a market we call ‘new-school luxury,’” said Kim Sung-joo, Sungjoo Group chairwoman, during a press conference yesterday at the head offices of MCM in Nonhyun-dong, southern Seoul.

“If classic brands like Gucci, Louis Vuitton and Chanel are old-school luxury, we are a new-school luxury brand serving young consumers in their 20s and 30s,” Kim said. “Their tastes are so diverse and they are totally different from the consumers of the past.”

“When I told staff members that I wanted to make a luxury backpack, nobody liked my idea because they thought of a backpack as something you carry when you go hiking.”

At Korean duty-free shops, the company even limits the number of items Chinese tourists are able to buy to five because some were purchasing MCM products in bulk to resell at a premium in China.

“I want to write a history and want to prove a small Korean company like mine can catch up to giants in the luxury market,” the 58-year-old business woman said.

In order to achieve 2 trillion won in sales by 2020, Sungjoo Group will open a research and development center in Europe and beef up mobile commerce sales platforms.