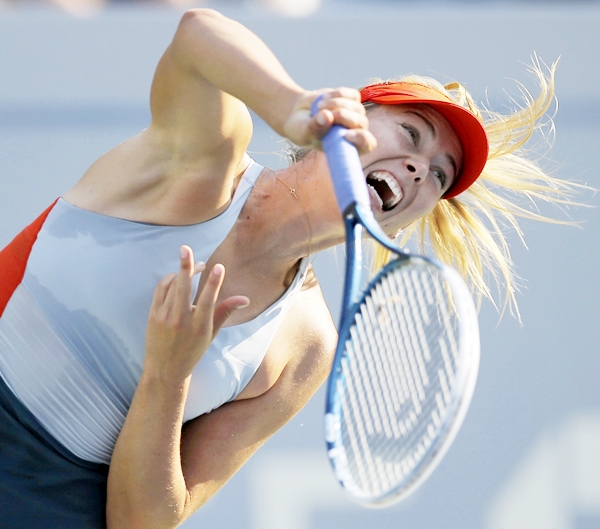 Maria Sharapova of Russia serves to Alexandra Dulgheru of Romania during their match Wednesday at the 2014 U.S. Open in New York. [REUTERS/NEWS1]

French Open champion Sharapova lost the first set to 95th-ranked Alexandra Dulgheru of Romania, but the five-time Grand Slam winner bounced back to reach the third round with a 4-6, 6-3, 6-2 victory in warm breezes at Arthur Ashe Stadium.

Radwanska was not so fortunate as she fell 6-3, 6-4 to world No. 1 doubles player Peng, who supplied a shock start to second-round play in Louis Armstrong Stadium.

Cilic and Lopez advanced in abbreviated fashion. Cilic was leading 6-3, 3-1 when Marcos Baghdatis of Cyprus retired with an ankle injury, while Lopez was at 1-1 in the fifth set when Croatian Ivan Dodig could no longer continue because of cramping.

Sharapova looked in trouble after 22 unforced errors in losing the first set against Dulgheru, who had risen to a high ranking of 26 in 2011 before knee injuries set her back.

But the 2006 champion recovered. Sharapova broke in the sixth game of the second set to lead 4-2 and served out to claim the set and start a run of five games in a row that took her to 4-0 in the third set and victory in the two hour 38 minute struggle.

It was a familiar formula for Sharapova, who leads the tour with 17 three-set victories this year.

“We started under the sun and finished under the lights. That’s what you call the U.S. Open, I guess,” said Sharapova. “I’m very happy I was able to come back and come through and win this match.”

The 28-year-old Peng, the French Open doubles champion, had 28 winners in the 96-minute upset of Radwanska.

“I had two match points and didn’t make it,” Peng said about two backhand errors that prolonged the match.

“But I just said ‘fight, fight’ and it’s an amazing time for me,” added the 39th-ranked Peng, who in February became the first Chinese player to become a world No. 1 in tennis.

Peng, who has six career runner-up showings but no singles titles, said she received positive support from fans.

“A lot of fans [tell] me in emails that I play her four times and the only time I win was in the U.S. Open four years ago,” related Peng. “So maybe I saw the luck may be coming back today.”