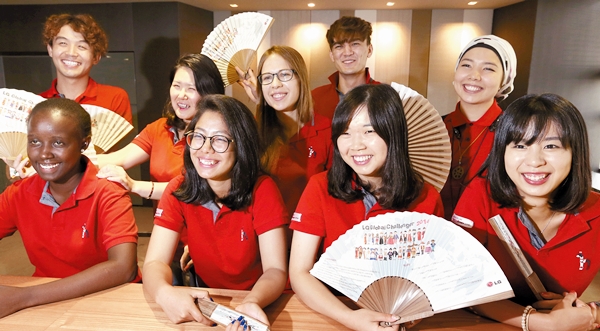 Nine international college students gathered in a cafe in Mapo District, western Seoul, on Aug. 22, to talk about Korea as they saw it through their own eyes. “Why do Koreans drink until really late?” asked one. “Why do programs at Korean festivals change every year? They don’t change for 100 years in other countries,” said another.

The students were part of this year’s LG Global Challenger group. Twenty students, teams of four from five universities, were selected after a rigorous competition that included submitting project proposals and interviews. LG Group has been supporting Korean college students to study abroad since 1995, but this year the company invited foreign students studying in Korea to mark the 20th anniversary of the Global Challenger project. This year’s proposals included exploring “eco-friendly, new reusable energy in Korea,” “Korea’s economy and industries,” “strategy for globalization of makgeolli [Korean rice wine],” “globalization of Korean professional baseball sportainment [sports and entertainment]” and “globalization of Korea’s regional festivals.”

When Paula Wanjiru Ngari came to Korea from Kenya in 2011, she wondered how electricity could be available 24/7 throughout the entire country. This sparked the young engineer’s interest in renewable energy in Korea. Zhenisbek Maya from Kazakhstan sees green energy as a gift from Mother Nature, not a source of wealth. So the two decided to research clean energy. The team visited wind energy plants on Jeju Island and in Gangwon and North Gyeongsang. They also visited a large solar plant in Taean-gun, South Chungcheong and a tidal power plant in Ansan, Gyeonggi.

Ngari: “I think Korea invests well with a small amount of money. I’m thinking about writing a report to the [Kenyan] government.”

▶Zhenisbek: “Governments are important, too, but I was really impressed with corporations like LG educating young students about new renewable energy for free. I wish corporations in my country were like that too.”

Ngari: “Jeju Island is my model for now. I firmly believe Jeju will become a green island that runs on renewable energy by 2030.”

When it was the makgeolli team’s turn to discuss its project, all the students seemed excited. The team’s focus was on a strategy for makgeolli’s globalization. They visited a makgeolli festival in Yecheon-gun, and breweries in Gongju and on Jeju Island. They saw 1,000 kinds of makgeolli.

▶Elizaveta Utesheva (Russia): “It was sad to see the makgeolli culture dying away.”

▶Amika Tasaki (Japan): “It’s popular in the global market, but it seems like Korea is focused on [makgeolli’s] traditional, simple atmosphere.”

▶Elizaveta: “Makgeolli is a really special beverage. It’s low in alcohol content and salubrious, making it perfect for the global trend. It can become even more popular than sake. Russians are buying it for more than 30,000 won [$30] per bottle.

“How about having makgeolli sommeliers who can explain what makgeolli is and suggest food that goes well with it? I think it’d be important to effectively target customers in order to market it in foreign countries.”

▶Akhmedov: “Samsung fans from Daegu and Lotte fans from Busan. You can’t separate geographical backgrounds from Korean baseball. Taking advantage of regional cultures, baseball teams are the pride of their region’s residents.”

▶Xinyue: “Women are rarely interested in sports in China, but Korean baseball appeals even to people uninterested in sports. Grandmas come with their grandchildren on their backs and ajummas [middle-aged Korean women] come out to de-stress. It’s so great.”

▶Xinyue: “Exactly. Create the market when there isn’t one. At SK Munhak Stadium in Incheon, there is a ‘green zone’ where families can camp out with tents and spend the day.”

▶Akhmedov: “The cheering culture is also a point of difference. Lotte fans, for instance, seem to go crazy. When I went to the Daejeon stadium, the Hanwha Eagles were losing but the fans kept on cheering and it was touching. Back home, if a team’s losing in a home gamein Uzbekistan, they’ll be criticized a lot.”

How did Korea manage to develop its economy quickly? Bakbubu Kyzy Ibraim from Kyrgyzstan and Era Pradhan from Nepal said they found the answer after visiting Posco in Pohang, North Gyeongsang, Hyundai Steel in Ulsan, and the LG Electronics factory in Changwon, South Gyeongsang.

▶ Bakbubu: “Korea is one of the most developed countries in Asia. I think Koreans get things done regardless of how difficult they are.”

▶ Bakbubu: “Both Posco and Hyundai Steel became gigantic companies, but they were founded by poor people. They all sacrificed not to become wealthy, but for the country, seeing everyone who was going through hardship. My country has the resources, but few people actually think about the country.”

▶Era: “What surprised me in Changwon was that there were a lot of women, and they work very hard. I realized that an ordinary woman can do work like that.”

▶ Bakbubu: “The government believes it when Posco reports it has no bribery in its self-inspection. Not in my country. Competitiveness comes from transparent and corruption-free management.”

▶Era: “Korean products are always No. 1 in Nepal. Korean companies check even the smallest details. The floors at factories were really clean. Starting all over because of a small scratch [on the product] - isn’t that the reason behind success?”

Monica Wonju Cho from Boston came to Korea in 2012 for the Interdisciplinary Graduate Program in Korean Studies at Yonsei University. Raised in America by Korean parents, Monica has long been interested in Korean culture. “I wanted to have various regional cultural experiences, not just something in Seoul,” she said. The best method was going to regional festivals. So the team went to Gangjin County, Goseong County and Jeju Island, and visited Boseong green tea farms and Haenam Ttangkkeut (end of the land) village. But Monica said her team was disappointed.

▶Monica: “There were many disappointments in the three festivals we looked around. It was especially shocking to see not enough safety measures even after the Sewol tragedy. It’s also a problem that the programs change depending on the participants. Global festivals don’t change their content, but people continue to visit the festivals, which seems far from Korea’s reality. Some problems are structural. The government checks how the festival was marketed and how many visitors came, and if the numbers aren’t good enough, it just gets rid of the Ministry of Culture, Sports and Tourism mark, so the festivals end up being performance-focused. But if we’re talking about festivals, don’t we need to view it from a long-term perspective?”