Smartwatches to debut at IFA

Smartwatches to debut at IFA 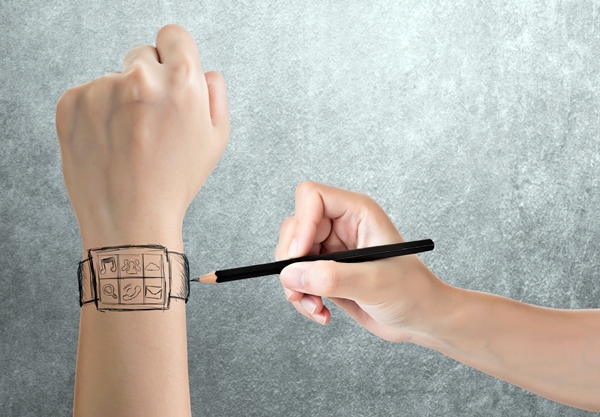 Global IT giants Samsung Electronics, LG and Apple are competing to prove that they have the best new smartwatch product ahead of the 2014 IFA home electronics show in September.

A wave of new wearable products will be on display along with each company’s home electronics.

According to research firm IHS, the market for wearable devices is expected to grow from 59.45 million devices this year to 71.91 million next year, and to 130.65 million by 2018.

At IFA, Samsung is launching the Gear S smartwatch, which can make and receive calls with a built-in USIM chip. It also uses Wi-Fi or 3G to check messages and calls. Other smartwatches can’t check calls or messages unless they are connected to a smartphone.

The Gear S is the sixth in the series since Samsung launched the Galaxy Gear last year.

In addition to being able to make calls, the Gear S has a voice recognition feature called S Voice, which allows users to record, send and replay messages.

The device has a two-inch (five-centimeter) curved super Amoled display to show those messages. It comes in black and white sapphire models to appeal to more fashion-conscious users and also has an interchangeable strap that can be switched from basic to a bracelet style. The strap comes in blue, red, brown and grey.

In terms of its software, the Samsung Gear S enhances applications that provide unique user experiences of wearable devices through cooperation with global partners.

The watch will provide navigation through map service provider Here, news through the Financial Times, and will come with Spritz, a speed-reading app.

The newest Gear watch is also better equipped to monitor fitness, including the S Health app, which uses GPS and barometer sensors to let users check their heart rate, speed and exercise route. The app can be linked with social media so users can compare their workout with their friends. 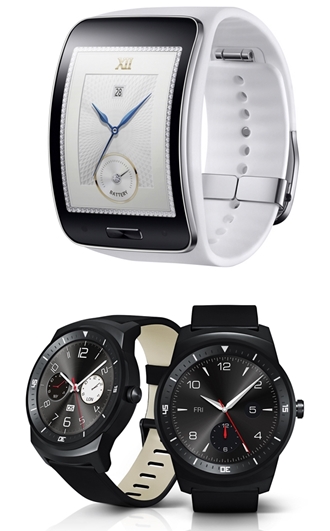 “Samsung Electronics has continued to show innovation in the wearable market by introducing various products and technologies,” said Shin Jong-kyun, CEO and president of Samsung’s IT and mobile division. “Samsung Gear S will open the new mobile user experience.”

Samsung will also launch a necklace-type wearable device called Gear Circle at IFA. It can be connected to the Gear S via Bluetooth, play music and receive calls. The two products will be on sale worldwide starting in October.

LG Electronics’ new G Watch R will run on Google’s Android Wear operating system, but the company has made the watch face round and metal as it decided the previous G Watch design was too unsophisticated.

LG said it is the world’s first watch to feature a 1.3-inch circular plastic OLED display, which shows clear images even in bright sunlight.

The smart watch can run any app available in the Google Play Store and it can stay under 1 meter of water for up to 30 minutes.

The watch also has a heartbeat?monitoring sensor and it notifies the user of missed calls and messages, upcoming events and local weather forecasts.

“What we’ve noticed in the year of the wearable is that this is a category that can’t be compared to smartphones and tablets,” said Park Jong-seok, president and CEO of the LG Electronics Mobile Communications Company.

“Wearables are also accessories and consumers will want more than one to choose from. So we wanted to complement the modern design of the original G Watch with the classic look of the G Watch R.”

Apple’s iWatch focuses on health care with the Healthkit app, differentiating it from other smartwatches.

Healthkit keeps track of how far the wearer has walked, the number of steps taken and how many calories were consumed.

It can also allow doctors to track blood pressure, body temperature, respiration and the level of glucose in the bloodstream, and they can then prescribe users with the proper medication.

Apple is also developing a Homekit platform for the iWatch, which is expected to control home electronics remotely.

It is likely that Apple will release the iWatch along with the iPhone 6 on Sept. 9 to maximize the connection between the smartwatch and the phone.