In the indie film scene, director Leesong Hee-il is well known, especially for making distinctive queer films. His representative filmography includes “Going South” and “No Regret,” which revolve around the issue of sexual minorities and the hardships they face in society.

This time, the prominent director focuses on gay high school boys as the film’s protagonists and sheds light on the brutal bullying these teenagers face every day at school. Yong?ju (Kwak Si-yang) and Ki-woong (Lee Jae-joon) used to be best buddies in middle school, but as they entered high school, their interests started to diverge.

Yong-ju, who keeps his attraction to boys a secret, aims to get into a prestigious university while Ki-woong becomes the leader of the school gang.

However, Yong-ju, now in desperate need of someone as he faces pressure to get into a top college and his single mother struggling, reaches out to Ki-woong, and the two develop an unlikely relationship, despite Ki-woong’s initial disregard for Yong-ju. They find a brief respite from the pressures of society, but soon they must confront the harsh reality of their school environment.

For those who remember watching the cartoon series “Teenage Mutant Ninja Turtles” during their childhood, this latest blockbuster may bring some nostalgia.

The film version is directed by Jonathan Liebesman, who has proved himself with heavy action flicks like “Wrath of the Titans” and “World Invasion: Battle LA,” and is produced by Michael Bay of the famous “Transformer” series.

The film adaptation does not deviate too far from the original comic strips plotline with four mutant ninjas ? Leonardo, Donatello, Michelangelo and Raphael ? climbing out of the sewer one day to save the New York City against rampant crimes and drugs.

The quadriad team up with fervent TV reporter April O’Neil (Megan Fox) and her goofy sidekick cameraman (Will Arnett) to fight against the villain Shredder (Tohoru Masamune) and his evil Foot Clan.

Megan Fox will once again prove herself the perfect candidate to fulfill adolescent fantasies, just like she did in the first two “Transformers” films.

Disaster films rarely fail to provide a quality experience at the cinema, and Steven Quale’s latest flick, “Into the Storm,” may be an apt choice to wash away the lingering heat now that summer is almost over.

The movie is set in the peaceful town of Silverton in Oklahoma where an unprecedented super tornado caused by abnormal changes in climate sweeps the town away one day, leaving everything in rubble. And what’s worse is that the heaviest cyclone is yet to come, according to several meteorologists.

And when the deadly tornado breaks out again, a team of professional storm chasers and courageous townspeople climb onto a heavily armed truck to videotape the once-in-a-lifetime vortex.

The videotaped part of the movie is filmed from a first-person perspective, which may give the audience a more realistic and mind-blowing storm experience. The film is set to open with 4-D effects as well. 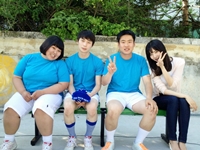 Directed by indie film director and actor Woo Moon-gi, “The King of Jokgu” is a youth film that revolves around a quirky college student Man-sub (Ahn Jae-hong), a bit of an outcast who cares about nothing else but jokgu, or foot volleyball.

While his peers are fiercely competing for higher GPA and Toeic scores in order to get hired, all Man-sub cares about is establishing a jokgu court on the campus.

He even suggests the idea to the Dean when he is supposed to discuss his low GPA marks.

A few days later, Man-sub falls for the most popular girl in his school at first sight and tries to win her heart, even if it means he has to compete against former national soccer player Gang Min (Jung Woo-sik).

Believe it or not, An-na (Hwang Seung-eon), the pretty girl, starts to show interest in Man-sub’s genuine approach towards her.

Ki-cheol (Song Jae-rim) takes his friends to a luxury resort owned by his father, but the group accidentally kill a janitor while there.

They decide to dispose of the body in a coal mine but get trapped in a tunnel where they hear someone whistling in the dark.

The film unfolds as the mystery man moves closer and closer to them.

Actress Jeong Yu-mi aims for the title of “horror queen” in this film.

Jeong has projected her cute, cheerful image through multiple films, TV series and the MBC reality show “We Got Married,” but the actress will show a completely different character in this movie.

Besides Jeong, viewers will also see members from two girl groups in the film, Do-hee of Tiny-G and Woo-hee of Dal Shabet.

Rambo, Terminator and Indiana Jones are all on one screen. Yes, the Expendables are back once again.

It seemed like there was no mission impossible for the dream team to accomplish until Conrad Stonebanks (Mel Gibson), a former member of the Expendables, betrayed the team and became an arms dealer.

Barney Ross (Sylvester Stallone), the leader of the Expendables, recruits new members in order to fight against Stonebanks.

In this film, fans are expected to see familiar faces from the previous “The Expendables” series, such as Sylvester Stallone, Jason Statham, Jet Li and Arnold Schwarzenegger, along with newly joined actors Wesley Snipes, Mel Gibson and Harrison Ford.

Actress Ronda Rousey, a well-known mixed martial artist, also takes part in the film as one of the dream team’s recruits.

Eun-jin (Kang Ye-won) struggles to make her seventh relationship work after six failed ones, but she starts to suspect her boyfriend, Hyun-seok (Song Sae-byeok), is hiding something from her and goes on a mission to find his hidden identity.

Fans have already seen the two collaborate in “The Huntresses” (2013), but this time around, the actress will aim for the title of “rom-com queen” while Song will surprise viewers with some very different traits from the characters he has played in earlier films.