‘Tazza’ sequel’s success is a sure bet

‘Tazza’ sequel’s success is a sure bet 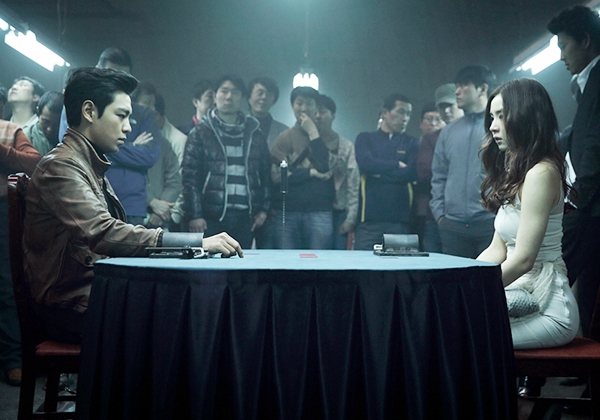 “Tazza,” the popular movie about gamblers involved in hwatu, a Korean card game, is returning to cinemas for a second edition.

While the first film in the series is about Goni - played flawlessly by Jo Seung-woo - who becomes the best-known gambler in town, the soon-to-be released sequel is about his nephew Dae-gil.

Choi Seung-hyun, better known as T.O.P from renowned K-pop group Big Bang, takes on the role of Dae-gil, who has a natural talent for gambling and risks his life on the game.

Yoo Hae-jin and Kim Yun-seok from the original movie are also involved in the second film, mingling with new characters who play hwatu and bet their money and lives on it.

“I didn’t feel pressure directing the film after the success of its prequel, which was directed by Choi Dong-hoon, but I was happy to be the director for the sequel of such a great movie,” said Kang at a press conference held on Monday at Lotte Cinema in Gwangjin District, eastern Seoul.

The highlight of the movie is a scene where the characters Choi, Kim, Kwak Do-won, Shin Se-kyung and Lee Honey sit around a table playing hwatu in just their underwear after Kwak suggests that the gamblers should play the game naked.

When asked about the hot scene, Shin, who played Mi-na, Dae-gil’s first love, said, “I felt a heavy weight on my shoulders, of course. But the funny thing is that we were starving while shooting the scene, so I could hear stomachs growling.”

“On the day of shooting, I saw Yoo appear in the studio, even though he didn’t take part in the scene,” laughed Lee, who plays the femme fatale character.

There are not as many eye-catching card tricks featured this time around, but viewers will be thrilled to witness intense psychological battles filled with deception and betrayal throughout various rounds of hwatu.

Another notable feature of the film is Choi, who pulled off his character well despite concerns about his transition from boy band member to actor.

“I tried to focus on Dae-gil’s characteristics, such as him being fearless and acting on his instinct,” Choi said.

Despite its 127-minute running time, there’s not a boring moment in the movie. It explores various aspects of the characters in-depth and is injected with more humor than the prequel, particular with actor Yeo Jin-goo and director Lee Joon-ik’s cameo appearances.