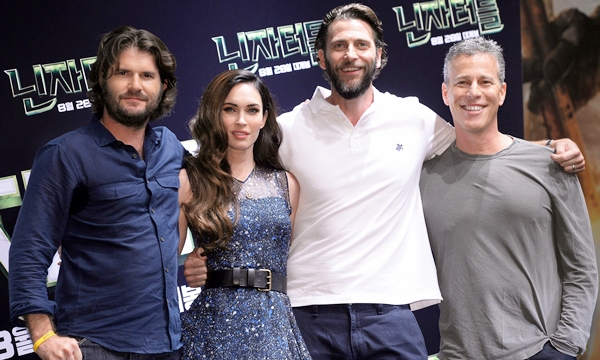 The “Turtles” crew pose for a photo during a press conference in central Seoul on Wednesday. From left: Director Jonathan Liebesman, Megan Fox, Andrew Form and Brad Fuller. Provided by CJ E&M

But although its beginning was humble, the “Teenage Mutant Ninja Turtles” comic soon gained immense popularity and became a pop culture cornerstone, with the four ninjas frequently appearing in animations, on TV and as toys.

Thirty years have passed, and the four ninjas are being resurrected, once again, on the big screen, bringing nostalgia to loyal fans.

This time, the reptiles have teamed up with Megan Fox, who plays the fervent TV journalist April O’Neil, to fight against the evil Foot Clan and save New York City.

Fox, who gained huge popularity here for her role in the “Transformers” series, visited Korea on Monday to promote the film, along with the movie’s production team and its director, Jonathan Liebesman.

“Ninja turtles is a massive, fun spectacle. We have Megan Fox, we have the turtles, the movie is about the strength of family. It is definitely the most fun and entertaining movie I have made,” said the South African director during a press conference at the Shilla Hotel in central Seoul.

Among its titillating factors, Liebesman emphasized that the message of the big-budget film is the “value of family,” suggesting that this is what makes his ninja story more authentic than other similar blockbuster flicks.

“The movie is all about family and that they are going to be there for you no matter what. ... That is the beating heart behind the franchise,” the director said.

When asked about how he shaped each turtle, Liebesman said that sticking to the original was the most important factor for him. 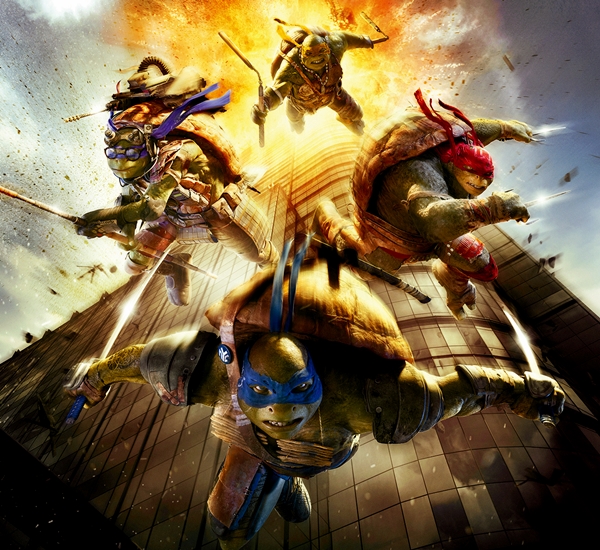 “We wanted to make sure that the characters in the ninja turtles are what we fell in love with in the cartoons. … So we made a sort of prototype for each turtle.”

He went on to explain that Tom Hanks from “Saving Private Ryan” was the template for Leonardo, one of the ninjas, and that Spock from “Star Trek” was the basis for Donatello.

Fox, who was also at the event, said that she tried to do a good job as April by conducting a lot of research about young journalists.

She added, however, that the movie is not about her pulling off a role as a journalist but is about the ninjas saving the city from evil.

When asked about her impression of Korean fans, the actress said, “I always love coming to Korea, and the fans are so polite.

“It’s interesting for me because back home everyone wants a selfie and an autograph. But here, everyone just want a handshake and there is something very genuine and sweet about that.”

The film opened yesterday in Korea.