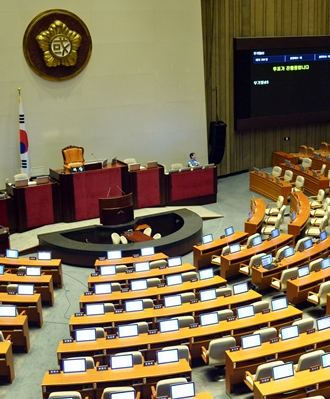 The main conference hall of the National Assembly was empty yesterday as the New Politics Alliance for Democracy boycotted all the activities in the Assembly to call for a new trilateral negotiation over the special Sewol law. [NEWSIS]

On Tuesday around 11 a.m., two men in suits visited the office of an incumbent lawmaker, pushing a cart carrying about 100 boxed lunches.

“We already ordered these lunches, but we couldn’t cancel them,” one man said, smiling awkwardly.

In the corner of the office, they placed seven lunch boxes, which the lawmaker’s secretaries ate later that day.

This was just one of the scenes that played out earlier this week, when ruling and opposition lawmakers abruptly canceled the parliamentary audits scheduled for government ministries and organizations, which were set to begin on Tuesday.

The prolonged stalemate over the terms of a special Sewol law has paralyzed parliamentary functioning this month, with a myriad of bills aimed to improve people’s livelihoods still stuck in limbo.

Ruling and opposition lawmakers as well as the families of the victims of the Sewol ferry disaster have continued to wrangle for weeks over the specifics of the law, which would investigate the root cause of the accident and the government’s poor response to the sinking. The main opposition, New Politics Alliance for Democracy (NPAD), refuses to pass any bills before the Sewol law.

An official with one government organization - who asked that its name be withheld - said it had already ordered the delivery of boxed lunches for 1,500 people in preparation for the audits, to be held at the Assembly, assuming it would be difficult for lawmakers and the officials to go out on such tight schedules. However, because the assemblymen scrapped the audits just a day before they were set to begin, the lunch delivery could not be canceled, the official said.

“Because the audits were canceled just a day before, we fell in trouble with how to deal with these lunches,” the official said. “So we ordered all our employees not to bring lunch or go outside for lunch on Tuesday and ate them at the company restaurant that day.”

With the lawmakers’ attention focused solely on the special Sewol law, other pending bills have piled up and the scheduled audits were also sidelined.

Officials from listed government ministries and organizations, whose operations were scheduled to be reviewed, were supposed to attend the first round of questioning on Tuesday at the National Assembly.

Due to the delay, the officials said they would not be able to work as usual until a revised audit schedule was released.

Some organizations have already spent considerable sums in preparation for the audit.

The Ministry of Health and Welfare spent about 30 million won ($29,591) on rental equipment, including a large speaker, and decorating the ministry’s conference hall in preparation for the audit, officials told the JoongAng Ilbo. The equipment was all returned on Tuesday.

“We also made a reservation at a restaurant for 120 people - lawmakers, their secretaries and other assistants - to have lunch and dinner during the two-day audit,” a health ministry official said. “A meal costs about 15,000 won each, and now we have to pay cancellation charges as well.

“We will have to make these preparations again,” the official added, “but it will cost more money.”