Quality of legal education under the microscope

Quality of legal education under the microscope 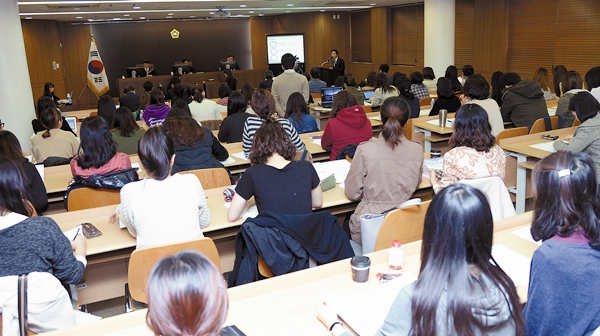 A 46-year-old female lawyer recently found herself in a confounding situation when she was tasked to deal with a fledgling attorney who had just graduated from law school.

The veteran attorney’s client was a newly divorced woman who was demanding child support from her ex-husband.

However, the husband’s lawyer had told them, “We cannot give a penny more in child support than is already set in the child support guidelines.”

But even when the presiding judge advised him to consider arbitration, the newbie lawyer, a graduate of a metropolitan law school - established by the government in 2009 - insisted: “Don’t we have to abide by the law?”

The veteran lawyer said she reasoned with the younger attorney, a graduate of the first class produced by Korea’s new graduate-level law school system, explaining to him, “There’s a need to adjust accordingly based on estimated income level and expected earnings.”

Referring to her experience with the novice lawyer, she added, “This is the result of an increase in practicing attorneys that have not received adequate practical training.”

Six years have passed since the new Western-style three-year law school system was established by the government in 2009 to replace the old bar examination system in Korea.

This system will soon replace the old rote-based bar exam, which was open to anyone regardless of education. Those who passed the old bar exam then went on to attend two years of mandatory training at the government’s Judicial Research and Training Institute, free of cost, before becoming lawyers.

But concerns have since arisen about the quality and practicality of the education provided at these new law schools amid an oversaturated legal market. And students as well as those in the field have expressed worries over outdated teaching methods, as well as grade and job competition in a fierce market.

The JoongAng Ilbo recently analyzed the backgrounds of 297 full-time law professors from all 25 law schools nationwide, with the results showing that an average of 6.3 years had passed since they had left their previous posts.

The problem, however, is that professors are obligated to give up their practice when they are hired full-time by law schools, meaning that for most, they must teach hands-on experience to students based on their own experiences from more than six years ago.

And there is also a limit to on-the-job training opportunities that the schools can provide through supplementary programs like guest lecturers.

“It is difficult to teach real-world experience vividly because, as professors, we are severed from it,” said Roh Myung-sun, a law professor at Sungkyunkwan University and former prosecutor.

Some professors have also been criticized for failing to advance from the lecture-based teaching styles seen primarily in undergraduate law classes, as well as for lacking experience. 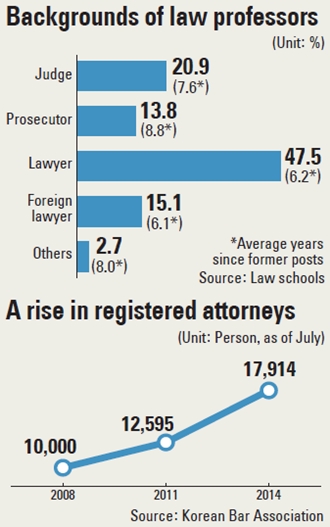 “Professors here think they can just read us legal provisions,” said Kim, a 27-year-old student enrolled at a metropolitan law school, “and there are five professors that specialize just in civil law, so students here call them the ‘five civil code enemies.’”

“Professors who are not practicing attorneys are training future lawyers, and they are even dominating subjects that should be taught by professors with real-world experience, and the students are the victims,” he added.

Some experts also argue that these new law schools lack proper curriculums, which has become a significant issue as the first round of lawyers make their way into the legal sphere.

“Professors who previously taught in [undergraduate] law departments need to adopt different teaching methods,” said a 31-year-old second-year law student enrolled at a provincial law school, “but there are many cases in which they just remain the same.”

But on top of teaching concerns, for students like Song, 26, a third-year law student in Seoul, fierce competition over grades is also a critical issue.

“Grade competition is so fierce that on Teacher’s Day [in May], students compete with one another over who can give the best gift to their professor,” he said. “[To keep my grades high], I don’t take classes taught by professors who are known for being stingy graders, even if I may need the subject as a lawyer.”

Young attorneys just starting out often face tough competition in the legal market, but those who did not graduate from top law schools or lack top-notch qualifications have an even more difficult time. For most, quality employment after law school, which is much more costly than the old bar exam system, is a prime concern.

One 37-year-old attorney who graduated from a provincial law school was hired part-time earlier this year at a small law firm in Seoul. He earns a monthly wage of 1.5 million won ($1,480) as well as 60 percent cut from whatever cases he handles.

Even more astounding, however, is that the new lawyer, surnamed Park, must pay an additional 1.5 million won per month to rent an office at his own firm essentially working there for free.

“My heart aches even more because our executive director always rationalizes that I should be paying them because they are the ones teaching litigation procedures to a fledgling attorney straight out of law school who has no work experience,” he said.

According to data provided by law schools, the average employment rate for the first batch of law school graduates in 2012 was 84 percent - considered decent.

However, quality employment opportunities for those who did not graduate from Korea’s top law schools - Seoul National University, Korea University and Yonsei University - are even scarcer, and perhaps the biggest problem is the imbalance of supply and demand in the legal sector.

According to the Korean Bar Association, the number of licensed attorneys in 2011 - before the country’s new law schools had produced their first graduating class - was 12,595. That has jumped to 17,914 lawyers currently. Once the third class of law school students, who graduated earlier this year, completes their internships, another 700 licensed attorneys will be added to this roster.

But there is also a limit to the stable positions available in the legal arena in the nation’s top 10 law firms, courts and prosecution.

The JoongAng Ilbo found, through analyzing data from 15 law schools, that of the first graduating class, 923 were employed, and of these, only 24.8 percent were hired by a law firm, prosecution or court ranked in the top 10. Of those new lawyers, 19.3 percent were hired by regular companies.

Fledgling lawyers who are hired by small, little-known law firms or by a private attorney usually must endure harsh employment conditions in their quest for success.

A new attorney who completes an internship earns an average monthly salary of 3 million won - but this can be as low as 1.5 million won for those who don’t perform well in their probationary period, or are forced to take on a part-time position at a small law firm. This is comparable to the average monthly salary of those who did not go to law school.

For this reason, many lawyers often take on two jobs, sometimes lecturing at a private institute or tutoring to earn extra cash.

Yet, despite such fierce competition, of the 2,600 law school graduates who are practicing lawyers, 71.4 percent are registered in Seoul - indicative of the expectations rampant in the field. “There are still many areas in the provinces and non-metropolitan areas that are in need of lawyers,” said a senior partner at one law firm, “but young attorneys are reluctant to practice law there.”