A new landmark hurt by rumors

A new landmark hurt by rumors 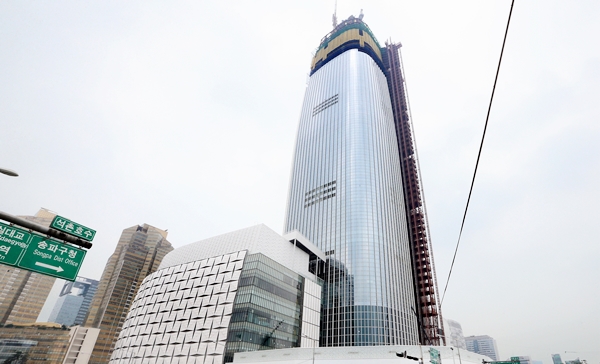 Some things that are considered a nuisance in Korea are celebrated abroad, and Lotte World II, which is being constructed in Jamsil, southern Seoul, is already one of them. The construction site is visited by quite a number of tourists from Southeast Asia. At first, the site managers turned down the request for visits, but lately they’ve allow visitors to tour safe areas. They are required to strictly follow safety instructions. While Lotte World II is being blamed for the appearance of sink holes in the area, it has already become a popular tourist attraction.

It deserves the popularity if you look at the spectacular building from Jamsil or from across from the Han River. The main building of the Lotte World II complex stands 555 meters (1,820 feet) tall with 123 floors. It is taller than Namsan. The building is to be completed by the end of 2016. Aside from the main tower, nine to 11-story buildings will house department stores and movie theaters. They are already complete and more than 1,000 stores have moved in and are ready to open for business. Once the buildings open, more than 6,000 people will be working there.

But controversies are plaguing the project and the businesses are desperately hoping to open for the Chuseok holiday. A store owner said he was growing fretful and is worrying about bankruptcy. As the municipal authorities demanded, considerable parts of the passages connecting buildings will be underground. But people think the sinkholes in the area are a result. There is also a rumor that the water in the Seokchon Lake is being drained.

On August 28, the Seoul city government concluded that the air pockets below the Seokchon Underpass were caused by the Metro line No. 9 construction. Seoul Mayor Park Won-sun has already said that the Lotte World II tower would not collapse.

We have to end the controversies. The building has meaning. It is the life-long wish of 92-year-old Lotte founder Shin Gyeok-ho. He has prepared more than 20 years to leave behind a landmark building in his homeland. Even when Shin struggled to make his name in Japan, he and his children did not give up their Korean nationalities. After a hip joint operation last year, Shin made his first appearance in eight months at this site. Lotte is spending 3.5 trillion won ($3.4 billion) on this project. It is an investment that will be hard to recover in 10 years. The businessman has a more sincere vision than just making money.

Lotte is also responsible for its reputation. It let rumors and speculations arise without actively communicating with the people. Still, it is too harsh to treat Lotte World II as a nuisance. We need to give it the respect it deserves.

* The author is a deputy business news editor of the JoongAng Ilbo.