For Korean stores, nothing beats tourists from China

For Korean stores, nothing beats tourists from China 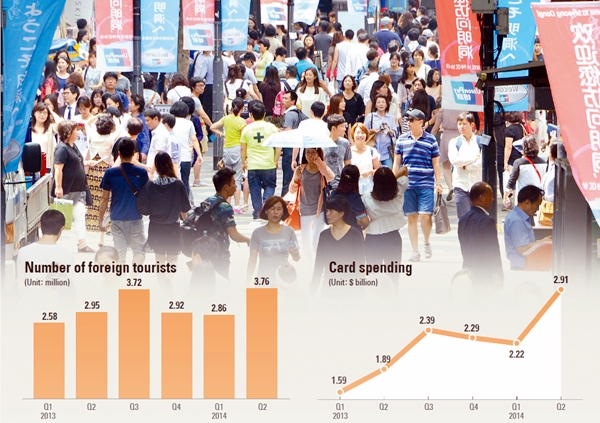 Even on a weekday, the streets of Myeong-dong are crowded. But the biggest change in recent years is that the thick crowds of Japanese tourists have been replaced by visitors from China.

Shop assistants sent out into the lanes to attract customers with a few words of Japanese are now shouting out the names of the latest eyeliners or lipsticks in Mandarin. But Myeong-dong is just one destination for the Chinese hordes. Lotte World, the nation’s only inner-city amusement park in Jamsil, southeastern Seoul, was once packed with Japanese high school students on field trips. You don’t see many of them anymore, although it’s easy to spot Chinese families trying to take pictures with strolling mascots. Chinese customers are crowding the luxury brand boutiques in department stores, where wives point to shoulder bags while their husbands with their fanny packs and frowns check out the price tags.

Last week Lotte Department Store set up a special VIP lounge exclusively for foreign customers who spend more than 3 million won ($2,958) a day or 10 million won a year. The lounge is located on the fourth floor of Lotte’s main store in downtown Seoul across from Myeong-dong. It’s obvious the lounge is intended for high-spending Chinese customers. Employees fluent in Chinese offer light snacks and beverages and give advice on Value-Added Tax refunds. The lounge can fit around 30 customers and the majority are Chinese.

Lotte recognizes the importance of Chinese customers, who as of this month accounted for more than 15 percent of sales at its main branch alone. Chinese customers now account for roughly 80 percent of purchases made by foreign tourists, according to Lotte.

The department store is particularly keen on Chinese customers traveling alone, with families or small group of friends. The tourists who are in huge groups normally have less time to shop and spend less as a result.

A study by the Bank of Korea yesterday showed that Chinese customers are playing a significant role in raising foreign tourist spending in Korea.

In the second quarter, credit card spending by foreign tourists visiting Korea increased 31.2 percent compared to the first quarter to $2.9 billion. It cited a spike in Chinese tourism as the main cause.

Between April and June, Chinese tourists, which now account for 40 percent of all foreign tourists, surged 55 percent quarter-on-quarter. In the first quarter more than 2.8 million foreign tourists entered the country, whereas in the second quarter there were nearly 3.8 million.

Korean card spending also grew in the second quarter, although the number of Koreans traveling abroad has shrunk.

Spending by Koreans overseas via plastic between April and June was slightly shy of $3 billion, a 5.4 percent increase compared to the first three months of this year.

The number of people traveling outside of the country shrank 6.6 percent from 3.93 million people in the first quarter to 3.67 million in the second quarter.

Credit cards were the most dominant form of payment by Koreans traveling abroad. Credit cards accounted for 72.8 percent of all plastic payments and grew 10.1 percent quarter-on-quarter.

Total spending abroad grew from $5.4 billion to $5.8 billion, and 51 percent was made on cards. On the other hand, debit card spending fell more than 5 percent during the same period.

Cards accounted for 51 percent of all payments Koreans have made during their trips abroad.