Bread baked from the heart

Bread baked from the heart 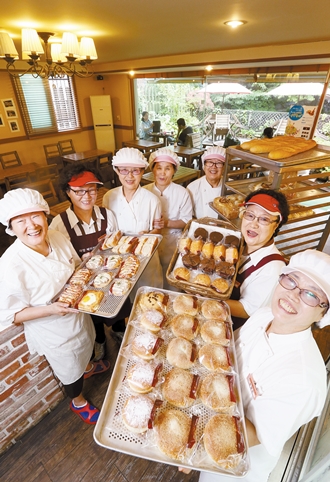 Employees hold onto pans full of bread at Maman, a bakery located in Seongnam, Gyeonggi. Those in white chef hats are bakers on the production team, while those in red caps are part of the cafe team who make coffee for the customers. By Kim Sang-seon

And the pizza bread, priced at 1,500 won, has ham, sliced cheese, onions, carrots and pickles between two slices of bread, with tomato sauce, mozzarella cheese and pickles on top. It is just big enough to be satisfying. These are just some of the options at Maman, a bakery and cafe in Sanseong-dong, Seongnam, Gyeonggi.

But unlike what the name suggests - Maman is French for mama - the shop is operated by 25 Korean elderly, who each receive a minimum wage of 5,210 won per hour. The youngest of them is 62 years old, while the most senior is 81.

And although Maman’s bread is cheap, the store’s annual sales total more than 300 million won.

Earlier this month, Maman was off to a busy start as usual. When the phone rang, 67-year-old Shim Soon-sik, wearing a red cap, picked up, “Cafe Maman.”

“Eighty-one cheese muffins by 1 p.m. on the 29th. Thank you,” she replies to an order from a nearby nursery.

In the kitchen, nine huge ovens hummed, busily baking pizza bread, muffins and breads to just the right shade of golden brown. The white board on the wall was covered with booked orders until Aug. 23.

Maman opened in August 2005 on the second floor of a senior community center next to Sujung Senior Welfare Center, in a residential area at Sanseong-dong. The social workers there wanted to “give the elders a place to work,” so 12 grandmothers participated in the baking lesson.

Things weren’t so smooth in the beginning. There were few customers who would make trips to the bakery, located on the corner in a residential area, and for the first four months, sales were only a few million won.

So the grandmothers decided to take their bread to the streets. Kwon Guk-ji, 73, one of the original members, admitted, “It was [like] jumping out to start sales after living my entire life as a housewife. There was this strong feeling that we needed to save our bakery.”

So the grandmothers opened tasting events at schools and nurseries and took orders. They also recruited a young baker from Seoul as the team’s manager.

Word spread that Maman’s bread was “made by grandmas who spared no ingredients, as if making food for their grandchildren,” and soon the regulars - nurseries and kindergartens included - gradually increased.

Some state-owned companies and nearby churches even provided contracts for a yearlong supply. “It’s [healthy], and I [can] treat my 4-year-old daughter with no concerns,” said Kang Eun-joo, 34, a Maman regular.

By 2009, just four years after the bakery opened, annual sales hit 100 million won. Now, it makes more than 300 million won and its number of workers has increased to 25.

Fourteen grandmothers make up the production team, while eight are on the cafe team. Two grandfathers comprise the delivery team and another grandmother takes care of customer management. Roh Ki-oh, 65, who is in charge of customer management, had previous experience managing customers at a department store, and seven out of eight cafe team members have barista certificates.

“I wanted to work because I didn’t want to leave my healthy body idle, but I never imagined I’d get a barista certificate,” said Lee Sook-yi, 67. Two grandfathers who manage deliveries come in at 7 a.m. and deliver bread to more than 20 venues each day. “Now that I’ve started working, I think I’m healthier than back when I played table tennis at the senior welfare center in an effort to exercise,” said Kim Heung-soo, 70.

Maman also gives back to the community. It supplies 1,000 soboro buns and 1,000 sweet red bean buns twice every month to a nearby soup kitchen. The bakery also gave more than 10 million won in scholarships to college students last year.

Its success has also been recognized by both the city and the government. In 2012, Seongnam opened a second Maman near Moran Station on the subway line No. 8, and earlier this month, Maman received 30 million won from the Ministry of Health and Welfare, which recognized the store as an outstanding institution for senior employment.