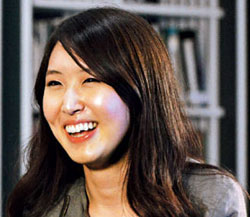 In just a few weeks, Korea may likely see its first female naval officer from a family-run conglomerate.

Chey Min-jeong, 23, the second daughter of SK Group Chairman Chey Tae-won, applied for the Officer Candidate School of the Navy in April, SK Group and the Navy announced.

They added that she already passed the written examination, interview and physical examination last month and is currently awaiting the final announcement.

Min-jeong’s maternal grandfather, Roh Tae-woo, a former soldier who served as Korea’s president from 1988 to 1993, reportedly had a great impact on her. Her mother, Roh So-yeong, is also a high-profile figure and serves as the director of the Art Center Nabi in Jongno District, central Seoul.

According to sources close to her, the 23-year-old is hoping to join the navigation branch, one of the toughest responsibilities among naval officers, working onboard naval vessels.

“Min-jeong has admired the armed forces since she was a teenager,” one of her acquaintances said. “Her maternal grandfather Roh also had an influence on her.”

Those who know her say Min-jeong is a strong woman - she announced her financial independence when she was a high school student - and that her upbringing was largely different from those of other children in the country’s most affluent families.

She graduated from high school and college in China, though she never attended international institutions. Rather, she went to a Chinese high school attached to Renmin University in Beijing.

Min-jeong frequently returned to Korea on her school vacations and worked part-time at a convenience store to earn extra cash.

Upon entering Peking University, she made money tutoring other students in English and mathematics.

During her first year in college, Min-jeong and her friends co-founded the Intercultural Union (ICU), a non-governmental organization to promote cultural exchange between Korea and China.

“I came to the conclusion [to start ICU] after mulling over how the East can compete with Western developed countries,” she said in an interview two years ago when asked her reasons for establishing the organization. “I first had the idea after I looked up documents related to my maternal grandfather at the library.”

Min-jeong’s parents were previously unaware of ICU and subsequently did not help to fund the NGO. It has since grown into a sizable organization with more than 2,000 members and runs as a social enterprise.

“I believe her father, Chey Tae-won, is particularly interested in helping social enterprises because he and she have had a positive influence on each other,” an acquaintance of the Chey family acknowledged.

In addition to her famous grandfather and renowned parents, Min-jeong also has an older sister and a younger brother.

Yun-jeong, 25, also spent her high school years in China and earned her master’s degree in business administration at the University of Chicago in the United States.

Their younger brother, In-geun, 19, recently graduated from high school in Hawaii and is set to attend Brown University in Rhode Island.

If Min-jeong is admitted to the naval officer academy, she will begin her 10-week basic military training from Sept. 15 and be commissioned as an ensign on Dec. 1.