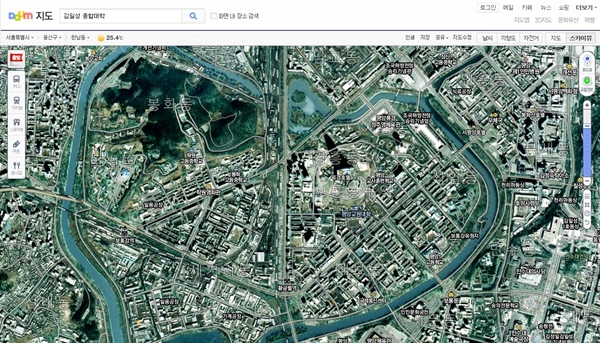 An image of Pyongyang available on Daum. The South Korean company is the first private business to provide high-resolution maps of North Korea. The maps are not limited to several cities like Google’s maps. [JoongAng Ilbo]

But the maps are a few years old and do not include areas around the military demarcation line.

The North Korean maps are based on government data that the National Geographic Information Institute (NGII) made public in March.

In downtown Pyongyang, viewers can easily find department stores, movie theaters, subway stations, hospitals and universities. Large bridges across the Taedong River can be seen, as can small streets in villages in detail.

Aside from Pyongyang, the map covers all nine provinces down to myeon and ri (townships and villages), the smallest regional units in rural areas. Borders between administrative areas are clearly shown.

Previously, such detailed information was only available to government organizations. Internet users would see empty space on Internet maps with the names of large cities like Pyongyang and Nampo.

Only individuals who made formal requests to the NGII were given access to the institute’s digital archive of North Korea’s map. They had to pay about $16.

Daum said its map service reflects the latest and most realistic geographic information of North Korea. According to NGII, the maps are based on data collected from 2007 through 2009.

“Daum’s map has a resolution of 2.5 meters [8.2 feet], fuzzier than Google Earth’s, and the data is a lot older than Google’s,” said Kim Chang-woo, a researcher at the NGII. “But the map covers all areas of the North, while Google only provides a few big cities like Pyongyang and Sinuiju.”

Making such information about North Korea public doesn’t appear to be a national security problem.

“The institute already completed discussions regarding this in March, when we first made this information public,” Kim continued. “Three parties - the Ministry of National Defense, Ministry of Unification and the National Intelligence Service - agreed to the opening.”

“Daum Map service excludes data near the military demarcation line,” Kim added. “Of course, the institute updates our maps every year, so we have more up-to-date information with better quality. For national security reasons, we decided to only open maps that are not too recent and not too detailed.”