NPAD gets cold feet in its boycott of Assembly

NPAD gets cold feet in its boycott of Assembly 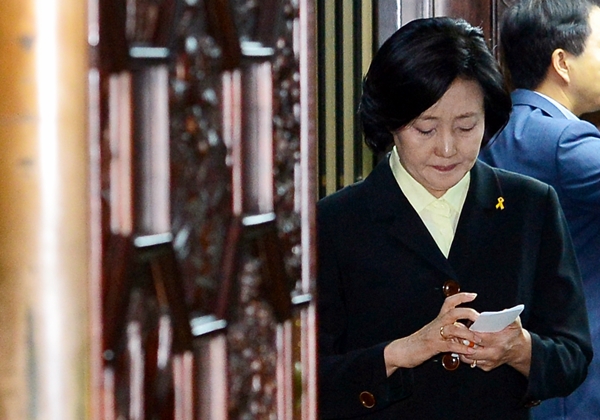 Park Young-sun, floor leader of the opposition New Politics Alliance for Democracy, checks her smartphone yesterday after a meeting with party lawmakers in the National Assembly. [NEWSIS]

Facing growing criticism from its own lawmakers about a parliamentary boycott it launched on Tuesday, the opposition New Politics Alliance for Democracy decided yesterday that it will halt a sit-in protest inside the National Assembly over the weekend.

The NPAD, which has seen a plunge in popularity in the wake of its boycott of the National Assembly, also decided to participate in the opening ceremony of a regular session that will start on Monday, though its leader said the NPAD has yet to decide whether it will resume deliberation on bills that are stuck in limbo.

While the country’s biggest opposition party has not yet decided on ending its boycott, the fact that it is willing to cease a sit-in protest in a conference room at the Assembly over the weekend indicates that the NPAD is buckling under demands from its own members to revise its confrontational position. The opposition instigated a gridlock with the ruling party over the special law to investigate the sinking of the Sewol ferry in April.

The NPAD’s decision to end a sit-in at the Assembly came three days after it launched a walkout and staged rallies in and out of the National Assembly, demanding that the ruling Saenuri accept its proposal to form a trilateral group involving the two parties and an association of bereaved families who lost their teenage children in the tragedy.

The party’s tough line has faced growing complaints from its own members, as signified by a joint statement issued by 15 lawmakers denouncing the boycott and urging the party to return to the National Assembly. It was a rare move for a minority group of lawmakers with moderate views to openly object to the leadership’s decision.

“Running away from the National Assembly was a very foolish thing to do,” said Rep. Kim Young-hwan, who was among the 15 lawmakers, in a radio interview with YTN yesterday. “Lawmakers should try to deliver on people’s demands through legislation and keep a check and balance on the ruling party,” said the dentist-turned-lawmaker.

In an opinion survey conducted by researcher Realmeter, the party’s approval rating went down to 16.6 percent on Thursday, a 6 percent decrease from only three days earlier. Considering its popularity once reached 42.4 percent on March 5, after a merger with supporters of software mogul-turned-politician Ahn Cheol-soo on March 5, the party’s approval has dropped by more than half.

The decision by Kim Young-oh, who lost his teenage daughter in the ferry sinking, to end a 46-day hunger strike on Thursday and his demand for the NPAD to go back to the Assembly, added further pressure on the party to find a new way to strike a deal on the Sewol special law.

It is expected that the NPAD, which commands the loyalty of 130 lawmakers, will determine whether to end its boycott at a lawmakers’ meeting on Monday.

There is a possibility that a breakthrough could be reached on the special law since the Saenuri Party is scheduled to hold a meeting with relatives of Sewol victims on Monday at the National Assembly.

The two sides had two such meetings last week. Ruling party lawmaker Kim Jae-won, who is involved in the negotiations, said yesterday the party’s position has not been changed: It will not accept the families’ demand to empower a fact-finding committee investigating the tragedy with the authority to both investigate and indict suspects.

“We made it clear to the families during our second meeting that it is unfeasible to give investigative and indictment rights to a fact-finding committee because doing so would inevitably be found to be unconstitutional,” said the former prosecutor.

Meanwhile, Prime Minster Chung Hong-won pleaded yesterday for the opposition to return to the National Assembly so non-Sewol laws aiming to boost the economy can be passed.

“A high number of bills including those related to the Sewol and economic revival are now stuck in limbo at the National Assembly,” said Chung at the government complex in Gwanghwamun, central Seoul, flanked by the justice and public administration ministers.

“I earnestly ask [political parties] to legislate bills on people’s livelihoods, anti-corruption and social security at the beginning of the regular session.”