A nighttime view of Clarke Quay in Singapore. In her book, Loretta Chen throws sensitive questions at her conservative homeland.[JoongAng Ilbo] 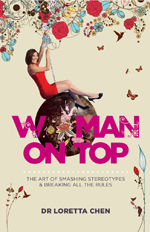 SINGAPORE - Two central themes of Loretta Chen’s “Woman on Top” - sexuality and censorship - come at a timely moment for her home country of Singapore.

In June, a record crowd turned out for a gay rights rally in the city-state, an event opposed by some religious groups that want to maintain a legal ban on same-sex relationships.

Then a debate on censorship erupted after the national library removed three children’s books, including one about two male penguins hatching an egg, following complaints they were not “pro-family.” It has since reinstated two of the books, but placed them in the adult section.

Chen, an award-winning theater director, uses her at times hilarious autobiography to take readers through the highs and lows of a life dedicated to shaking up her conservative homeland.

She made it her personal mission to challenge the status quo after the suicide of her ex-girlfriend while she was a post-graduate student in the United States.

Doing this can be difficult in Singapore, where the authorities vet play scripts prior to performance, meaning Chen sometimes changed scenes to ensure they could be performed.

Chen spoke to Reuters about her book and about debates raging in Singapore.

Q. At 38, you are considered young to be writing an autobiography. What made you write this book?

A. I wanted to write this book for my 24-year-old self who was very broken and had no one to talk to about my depression. All the self-help books out there at that time were providing an American perspective and it was a taboo in Asia to be outpouring grief.

There is an undercurrent of repression because of people’s fears of being judged. Grief is seen as a sign of weakness so they deal with it with immense discipline and stoicism. Although it is uniquely Asian, I felt it is my duty to get my story out there and, in the process, dispel the myth of depression because if it remains stigmatized, people will not talk about their guilt, pain and shame.

I guess the straw that broke the camel’s back was when another close friend committed suicide last year. The book became timely following the reunion with co-author, Pearlin Siow, after two decades.

You have been very candid about your sexuality and active engagement with civic politics in Singapore. How do you think the government’s attitude toward censorship has changed?

When Prime Minister Lee Hsien Loong first took office, I felt we were truly opening up. For once, we did feel an air of change, but the proliferation of social media and the loss of some [electoral] constituencies scared them [the government].

The fear of losing made them clamp down on certain things to appease voters. It is almost like a defensive mechanism where it kicks in and becomes more protective which ironically leads to people wanting to revolt even more.

What do you think of Singapore maintaining the section of law that criminalizes sex between men?

Can Singapore maintain censorship rules and become an Asian hub of arts and culture?

Singapore is living a dual identity with censorship. On one hand, Singapore wants to promote herself as a liberal, cosmopolitan, accepting city but with that comes dissent and a proliferation of voices which I think we are not ready for yet. As a result, we put in more barriers and barricades.