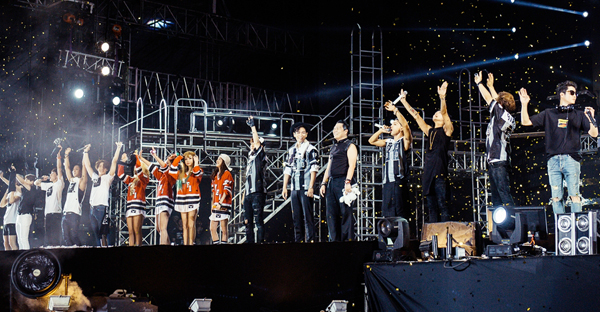 Artists managed by YG Entertainment gathered together for a family concert over the weekend in China, where about 35,000 fans came out to Shanghai Stadium on Saturday for “YG Family 2014 Galaxy Tour: Power in Shanghai,” the agency’s first in the country.

Girl group 2NE1 opened the show with “Crush” from its second full-length album. The group continued with “Fire” and “Come Back Home” to cheers from the audience.

Hip-hop group Epik High took to the stage next, performing “Fly,” “With You” and “Love Love Love.”

Big Bang performed its popular tunes, including “Bad Boy” and “Fantastic Baby,” while CL of 2NE1 and G-Dragon of Big Bang rearranged some of their own songs. Seung-ri of Big Bang also parodied G-Dragon’s solo hit “Crayon.”

Psy also came on to the stage to perform his viral hit “Gangnam Style,” followed by “Right Now” and “Champion.”

YG’s family tour will continue on to Singapore for a two-day concert starting on Sept. 13. The group will fly to Beijing on Oct. 19 and then to Taiwan for another performance on Oct. 25.