Chelsea stays on top after 6-3 win

Chelsea stays on top after 6-3 win 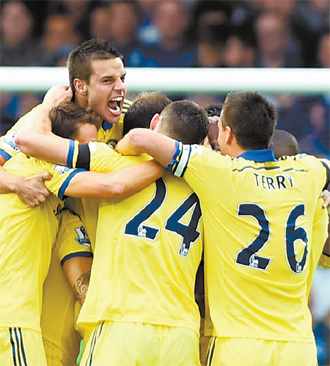 LONDON - Chelsea secured a third straight win in the English Premier League by beating Everton 6-3 to go to the top of the early standings.

Chelsea showed off its newfound attacking sparkle in its win on the day Manchester City lost its cutting edge to slip to a surprise first defeat in its Premier League title defense.

City’s 1-0 home loss to Stoke on Saturday was exacerbated by its title rival’s wild victory at Goodison Park, in which Spain striker Diego Costa scored in the first and last minutes to continue the superb start to his Chelsea career.

Another big-money arrival in English football, Angel Di Maria, made a promising debut for Manchester United but its 0-0 draw at promoted Burnley left Louis van Gaal’s side with just two points in three games - despite a spending spree of $215 million this summer.

Chelsea has no such problems, with a third straight win leaving the team top of the early standings on goal difference from surprising Swansea.

On a day to forget for Everton and U.S. goalkeeper Tim Howard, Costa scored after just 34 seconds and Branislav Ivanovic put Chelsea 2-0 ahead inside three minutes, only for Kevin Mirallas to reduce the deficit for Everton just before halftime.

Seamus Coleman’s own goal in the 66th minute sparked a rush of five goals in a chaotic 11-minute spell during which both defenses were carved open to the dismay of the team’s managers.

Steven Naismith made it 3-2, Nemanja Matic regained Chelsea’s two-goal lead in the 74th, but Everton came back again through Samuel Eto’o’s header on his debut, against the club that released him in the summer. Ramires put Chelsea 5-3 ahead and Costa wrapped up a madcap second half with a low finish after a back-heel from substitute Didier Drogba.

Swansea is tied on nine points with Chelsea after beating West Bromwich Albion 3-0 thanks to two goals from Nathan Dyer and another from Wayne Routledge.

In Spain, Atletico Madrid held on to beat Eibar 2-1 on Saturday to record an unconvincing first win of the Spanish league season.

Atletico received the trophy as the champion of last season before the match to the delight of the packed Vicente Calderon Stadium. And it looked ready to keep the celebration going after taking a 2-0 lead in a one-sided half hour following headed goals by Miranda and Mario Mandzukic in the 11th and 25th minutes.

But Eibar defender Abraham Minero’s goal in the 33rd gave the promoted club renewed confidence, and the modest Basque side kept alive its chances to draw through a second half that had the home fans on edge.

In the Bundesliga, Schalke captain Benedikt Hoewedes equalized to give his side a 1-1 draw against Bayern Munich, denying Xabi Alonso a win on his debut for the German champions.