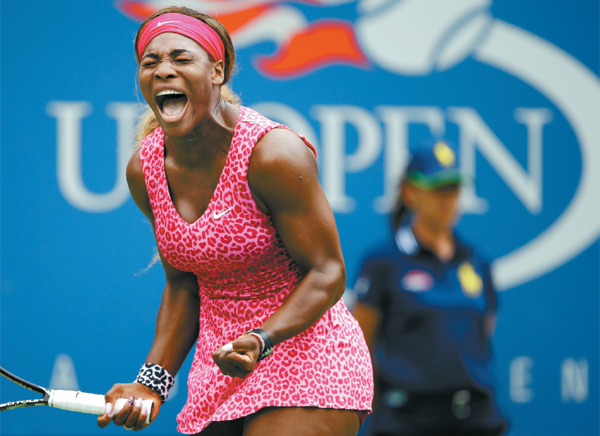 Serena Williams celebrates after a shot against Varvara Lepchenko of the United States, during the third round of the 2014 U.S. Open tennis tournament on Saturday in New York. [AP/NEWSIS]

NEW YORK - Wimbledon champion Petra Kvitova was stunned in the third round of the U.S. Open by a scrambling, moonballing qualifier ranked No. 145.

Aleksandra Krunic, a 21-year-old Serb who until this week had not taken even a set from a player in the top 30, crumpled to the court in celebration and shock Saturday when she pulled off the 6-4, 6-4 upset of the third-seeded Czech.

“Of course, I didn’t expect to win,’’ said Krunic, the second qualifier to pull off such a shocker after 121st-ranked Mirjana Lucic-Baroni beat No. 2-seeded Simona Halep on Friday.

Even when Krunic took the lead in the second set and the Louis Armstrong Stadium crowd was cheering her on, “I just told to myself, ‘It’s still on her, you still have nothing to lose.’’’

“I really focused my 100 percent not to think about anything that is happening - about the court, about so many people, about Petra,’’ she said.

After a week of upsets on the women’s side, only three of the top eight seeds remain, No. 1 Serena Williams, No. 5 Maria Sharapova and No. 7 Eugenie Bouchard.

Kvitova, who would have ascended to the No. 1 ranking if she won the U.S. Open and Williams had lost before the quarterfinal, committed 34 unforced errors against the fast-moving Krunic, who slid and sometimes went into a split to chase down every ball and make her opponent hit one more shot.

Kvitova too often failed to do so, including what should have been an easy putaway of a drop shot that put Krunic a point away from winning the first set. Kvitova sprayed a backhand long on the next point to lose it.

Those problems continued in the second set, and in an epic 27-stroke rally on match point, Krunic looped several towering shots before Kvitova sailed yet another forehand out to end it.

“She played really unbelievable tennis and she put a lot of balls back ... almost all of them,’’ said Kvitova, a two-time Wimbledon champion who has never advanced past the fourth round at the U.S. Open. “I was trying to fight and fighting every point, but it was so difficult. It wasn’t really my day.’’

Krunic next faces 16th-seeded Victoria Azarenka, a straight-sets winner over Elena Vesnina. Azarenka, who has lost to Williams in the past two U.S. Open finals, said she had never seen Krunic play before.

Novak Djokovic says his fellow Serb Krunic bumped him out of a private physical therapy room in the players’ gym before her second-round match earlier this week and ran into him in the gym again before her upset of Kvitova. “I hope she kicks me out every single day so she keeps on winning, if that’s the lucky charm,’’ he said with a laugh.

There was no upset for Williams, who easily moved into the fourth round by beating 52nd-ranked American Varvara Lepchenko 6-3, 6-3.

Williams, a 17-time Grand Slam singles champion bidding to win her third U.S. Open in a row, had some trouble dealing with the whipping wind in Arthur Ashe Stadium but eventually took control against Lepchenko, a 2012 Olympic teammate and occasional practice partner.

“I’ve been a casualty this whole year at Grand Slams. I’m just hoping to keep staying in there,’’ said Williams who has lost early in every Grand Slam tournament since winning at Flushing Meadows last year.

The men’s side, meanwhile, remained largely true to form. None of the top 10 and only two of the top 20 seeded men had lost entering Saturday.