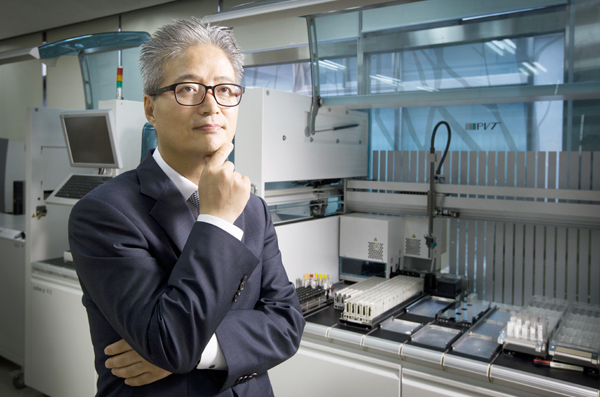 Ahn Eun-uk, general manager of Roche Diagnostics Korea, hopes to raise public awareness of the significance of advanced diagnostics that reduces the risk of serious side effects and ineffective use of prescription drugs.

Even though a diagnostics test can be the determining factor in whether or not treatment succeeds, the value of diagnostics has been underestimated by investors and in terms of market size, Ahn said in an interview with the Korea JoongAng Daily last week. For Roche Diagnostics, Korea is a significant market where the company tests new technologies and products for all of Asia in conjunction with the local medical sector.

“In Korea, the diagnostics industry usually has to invest extra time and money until receiving approval from the government, because regulations and standards are tougher than in other countries,” said Ahn. “Some foreign diagnostics companies even invest more than they expect to gain in profit. But Korea is a strategic market and crucial test market for Roche. The high standards and demands by top medical professionals in Korea often result in new ideas and feedback on existing products.”

Q. Most consumers are unfamiliar with the services Roche Diagnostics Korea provides. And what role exactly does diagnostics play in medicine?

A. Roche Diagnostics Korea produces test equipment and related reagents for in vitro diagnostics, which tests for illnesses in human fluids like blood, urine and saliva. Unlike image diagnostics, patients don’t see large and expensive equipment. You don’t get to see the diagnostics facility for blood tests.

Diagnostics plays a crucial role throughout the medical process, from screening the body to predicting and monitoring illnesses. The more precise the diagnostics, the less painful and more effective the treatment process.

Only a third of cancer patients are successfully treated using conventional drugs retailed in the market, while another third are treated but suffer side effects. Treatment fails for the final third.

Patients can’t avoid using these expensive drugs because they don’t know whether or not they will work for them. That is why Roche Group started developing customized drugs for smaller groups of patients based on their genetic traits.

By co-developing diagnostics and pharmaceutical products, Roche hopes to offer targeted therapies customized to groups of patients that show different genetic traits and react differently to a particular medicine.

How significant is the diagnostics sector in the overall health-care industry?

The diagnostics market is estimated to be only 2 percent to 3 percent of the world’s total spending on health care. The number is slightly larger in Korea. Still, it is a small industry compared to the total health-care market, suggesting it is still undervalued.

Considering that almost 70 percent of medical decisions are based on diagnostics, the diagnostics market should expand.

Also, diagnostics is a realistic way to cut health-care costs because it is crucial for the detection of disease and success of treatment.

Investment in the targeted therapy system may cause some financial loss in short term because products are designed for only a third of the total market. Conventional drugs promise more profit because they target the entire market.

However, I think the new drugs for customized treatment are more beneficial in the long term.

When pharmaceutical companies can provide solid scientific evidence that targeted drugs produce better results, I believe health authorities around the world will expedite their approval and allow higher prices.

Ahn Eun-uk and his employees (left) have an in-house fundraising event last year for Dreaming House, a project by Good Neighbors to help underprivileged children. Management and employees of Roche Diagnostics Korea participate in their annual walk for African children on June 13. Provided by the company

How much does Roche invest in R&D?

Roche Group invests more than 19 percent of its revenue every year, the highest level of any health-care company in the world. A significant portion of that is geared toward developing a personalized health-care system, which involves both diagnostics and pharmaceuticals.

As human lifespans gets longer, the health-care system is not just about treatment, but also about prevention and early detection of disease. So Roche has kept on investing in developing drugs and efficient diagnostics technologies.

Roche Diagnostics Korea has four business areas. What are they?

Our largest department is professional diagnostics, not just in Korea, but worldwide. This department researches and develops machines and equipment that check chemical and immune responses.

Blood tests are a good example. With a single exsanguination, one machine can conduct more than 100 tests simultaneously. It does biochemical tests on organs, immunity tests ranging from hepatitis to AIDS and tests to detect cardiovascular diseases and cancer. Because such tests are fundamental, this is our largest department and largest revenue producer.

Our second-largest business is molecular diagnostics, which analyzes DNA. For example, Ebola virus is undetectable during its latent period, which requires people to wait until they get sick. The DNA analysis identifies the virus using its DNA structure. This significantly accelerates diagnosis and treatment of such viral infections.

This is a growing business area, as scientific research on DNA is advancing and new viruses are appearing. In the near future, I think a pool of analyzed data will be developed featuring genetic information for each race and nationality. This will eventually advance into an automated system that figures out specific kinds of cancer and diseases for which a patient is at risk.

How is the Korean market perceived by Roche Diagnostics headquarters in Switzerland?

Roche Diagnostics Korea is responsible for 1.6 percent of total sales of all diagnostics offices in the world, which is small. But within the Asia-Pacific region, our Korean office is the third largest after China and Australia. China is No. 1 thanks to the size of its market, but the Australian and Korean offices are similar in size. We are proud to play a crucial role in leading business growth.

How does Roche Diagnostics headquarters evaluate the Korean staff?

The Swiss headquarters thinks Korea is a dynamic place with passionate people who make impossible things possible. One example occurred in January. Our office implemented Roche Diagnostics’ new automated testing facility at EONE Laboratories, a test center based in Songdo, Incheon, which became the first customer for such a facility in the world.

It was a big project that usually takes more than six months to implement. But our staff completed the entire process in just two months. Most of them even worked during the Lunar New Year holidays.

The success became widely known in the Roche Group as proof of Korean workers’ diligence.

After going on a study-abroad program based on a scholarship at age 11, I was educated and spent a significant amount of my life in Switzerland. So I think differently about an employer investing in employee training, unlike many other high-level managers who see it from the perspective of cost.

I think of it as neither a cost nor a charity. As a branch of a Swiss company, we launched the meister training program, benchmarking Switzerland’s traditional vocational education and training program. We were the first Korean-based foreign company to launch such a program, even before President Park Geun-hye visited Switzerland early this year and launched a similar program.

Our program hired its first three students last year in hopes of showing that someone can be a capable and bright employee without a big-name university degree. In Korea, there are many cases where young talent doesn’t match the needs of companies. Vocational high school students who were actually interested in medical equipment applied to our program. Their eyes were shining with dreams and ambition.

We plan to continue this program for four more years, to grow a total of 15 meisters at Roche Diagnostics Korea. 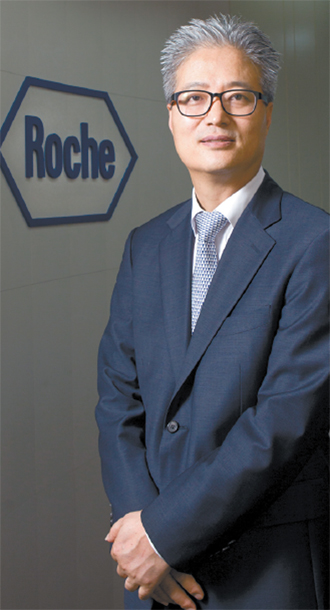 1992: Master’s degree in economics with emphasis on marketing, University of St. Gallen, Switzerland

2011: Head of applied science and professional and molecular diagnostics at Roche Diagnostics Korea