For Monsanto, IT key for future food supply

For Monsanto, IT key for future food supply 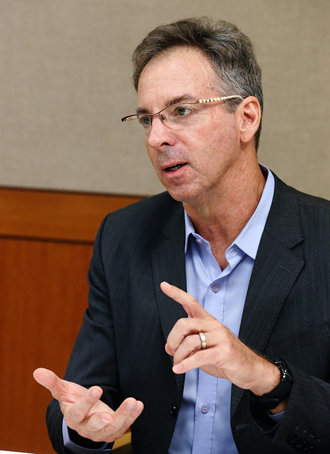 Agriculture is a high-tech industry that needs smart people, said Harvey Glick, a senior director of Monsanto for the Asian region.

“I hope our scholarship program can help bring students’ attention to agriculture,” Glick said in an interview with the Korea JoongAng Daily. “It is an issue all over the world. Farmers are getting older and young people don’t want to work in agriculture.”

He advised the Korean government to educate young people about cutting-edge farming as part of efforts to develop the industry.

“The government has to work with universities to make more students want to study agriculture,” he said.

The Canadian national who studied agriculture and worked for Monsanto for 30 years stressed that contemporary agriculture really needs the cooperation of engineering and IT.

“I never imagined that IT was going to be part of agriculture,” he said. “We need smart people as well as IT technology to solve the problems of agriculture and design equipment that helps grow more food efficiently.”

The world is facing huge challenges such as climate change and food shortages, so agriculture will be much more important, he said.

Monsanto is a multinational agrochemical and agricultural biotechnology corporation headquartered in St. Louis, Missouri. It is the largest producer of genetically engineered seeds and of the herbicide glyphosate, which it markets under the Roundup brand. Monsanto Korea was established in 1991.

Q. Why did Monsanto decided to establish scholarships for Korean students?

A. Like Korea, we believe in education. Monsanto has a lot of Ph.D.s working for us and we think it’s going to take a lot of smart people to study problems in agriculture. We want to encourage Korean students to study agriculture, breeding and biotechnology. So we partnered with Seoul National University, which is one of the leading agricultural universities in Korea.

Talking about how we could establish scholarships that would encourage students who might reconsider studying agriculture, the faculty mentioned that, as in many other countries, there are fewer students studying agriculture here. It’s a big problem, because the problems of agriculture are so big - growing more food, more environmentally responsible, climate change. So we are going to need smart people to answer all these questions. But they are studying IT or finance. So it’s a real challenge. Hopefully, this will help bring more of the best students to studying agriculture.

What is the role of IT in agriculture?

It is becoming an important part of many new technologies. In agriculture, biotechnology and breeding research, the ability to analyze large amounts of data quickly and efficiently and look for combinations and patterns that might lead to significant breakthroughs is so important. People don’t think that is agriculture. They think that is IT. But, in fact, we need IT for bioinformatics in agriculture. We need engineering to design new equipment for farmers to grow more food efficiently. We need molecular breeders who can figure out how to make crops resistant to drought. So I think it’s going to take a whole new integration of many disciplines. I heard from professors at Seoul National University that they are beginning to think how they can change the agricultural faculty. So it’s like you don’t just study horticulture or entomology. You might have to take a course in computer science, engineering and in breeding, because to solve the problems you will need all of those together. I am hoping that people who are interested in computers may say there may be interesting applications of computer and food production or environment. Hopefully, that’s the direction we will go and many experts will contribute to food production.

Do you think the Korean agricultural industry has good growth prospects?

Korea imports most of its food. It’s not self-sufficient. So a big challenge for Korea is ensuring a steady supply of high-quality imported food. So one of the things that we do is to ensure there is a steady supply of good corn, soybeans and vegetables grown and imported into Korea. We spend a lot of time ensuring that Korea has access to high-quality material imports so it can meet food demand. I hope Korea one day grows more crops and allows cultivation of more varieties made with modern biotechnology. Because there is little land, it’s a bit challenging to do agriculture here. But Korea has very good potential - the level of knowledge at universities and it IT infrastructure - for making it possible to grow more food on less land, make crops more resistant to drought and rains. I think there are a lot of opportunities for rice crops in Korea.

Should we be concerned about food shortages in the future?

Some people say the agricultural industry should be called the “agri-food industry” because the two are connected. The industry will grow in the next 20 or 30 years because the challenges that we are facing are so huge. There are so many people in Asia, but no more land. They are running out of water. We need to use less chemicals and fertilizers. Climate is changing. To produce more food, we need to bring people from other sectors like IT and engineering. We had some difficult years of food production. Even very recently in 2008, there was bad weather, and food and crops in several big countries were weighed down. In Jakarta, there were riots in the streets because of the price of soybeans. In Asia alone, we have already experienced what can happen when the food supply is not enough to meet local demand. Since then, many governments have said, “We need to develop strategies for food security.” Now they have begun to say “nutrition security.”