OTT devices could steal the show

OTT devices could steal the show 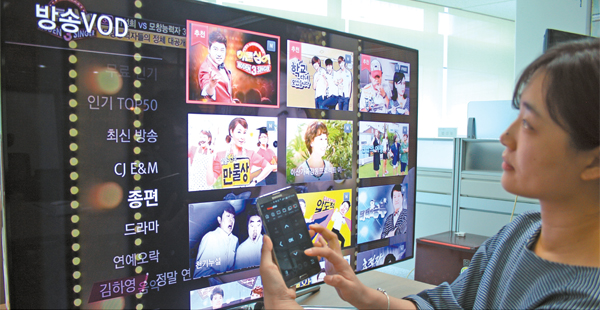 By connecting CJ HelloVision’s Tving Stick to televisions, users can choose channels and videos on demand from their smartphones to watch on TV. Consumers are increasingly using such over-the-top devices that retail for about 50,000 won. Provided by the company

A newlywed couple, identified as the Moons, got a large-screen TV for their new home but didn’t sign up for paid program services or Internet television. When the couple wants to watch TV, they use Google Chromecast, an over-the-top (OTT) device that allows users to stream content from their smartphones or computers to television screens.

With high-speed wireless communication services and various online content, the IT corporations as well as telecommunications companies and content providers are jumping in to release OTT devices.

On Aug. 11, CJ HelloVision launched Tving Stick that allows access to TVing, a multi-device content service, on television. This means a larger screen for all that Tving offers, which includes 50,000 or more VODs for movies or television programs and 150 television channels. It’s as simple as downloading the Tving Stick remote control app and plugging a USB device in to the TV. Using the “casting” method of transferring smartphone content to television through Wi-Fi, users can use their smartphones while watching television. 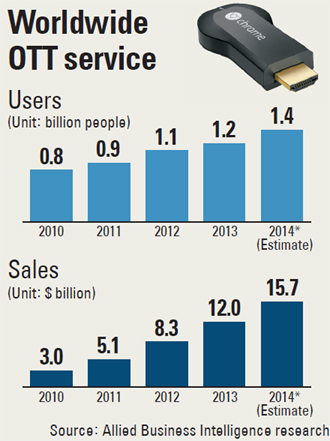 Tving Stick “can be used for televisions or projectors in any area with good wireless access, like dormitories and condominiums, not to mention homes with wireless routers,” says Lee Jong-han, head of the technical department at Tving. “Terrestrial television channels can be received directly.” The OTT service pioneer is Google’s Chromecast, launched globally in July 2013. Parks Associates, a market research company, estimated 3.8 million Chromecast unites were sold worldwide last year. In Korea, Chromecast was released in May. Google Korea offers content from Tving and Hoppin, but users must pay a fee.

SK Telecom has a comparable service called Smart Mirroring. Using Wi-Fi, the device transfers or “mirrors” the content on smartphones to another device like TV. However, smartphones cannot be used for other purposes while content is being mirrored.

OTT devices have their perks by freeing users from the specific air times on televisions and by providing services for a cheaper price, attracting those in one-person households or those who own a second television. However, OTT services don’t have a structured content distribution network or platform. If companies can secure a content distribution network between mobiles and televisions through OTT devices, that would open up another profitable area for companies to benefit from the fees and advertisements. OTT services also can propel the use of more diverse mobile content. For instance, consumers might be able to check out home shopping programs on their large-screen televisions.

Changes that have weakened the position of broadcasting, with the exception of news and sports, also are contributing to the expansion of OTT devices. The VOD market in Korea is forecast to grow fivefold to 230 billion won this year from 48.2 billion won in 2008. “The disparity between mobile devices and television disappeared as television watching changed from regular broadcast programs to online streaming or VODs,” says Ko Jae-young, a board director at Kaon Media. “OTT devices will expand their influence by substituting for the paid services.”

This cord-cutting trend already has begun in the United States, where people are terminating cable TV service that can cost in excess of $100 a month and switching to OTT services. From 2011 to 2013, paid content subscribers decreased by 7.6 million users in America.

Experts, however, predict that cord-cutting won’t be so prominent in Korea. Compared to the United States, satellite and cable program service fees are much less in Korea, and OTT services have had limited success attracting people aged 40 and older who prefer terrestrial television channels. There also are pending issues over copyrights. Terrestrial television networks claim services such as Tving and Hoppin signed contracts to provide channels on smartphones, which makes it a breach of contract to air the channels on TV.