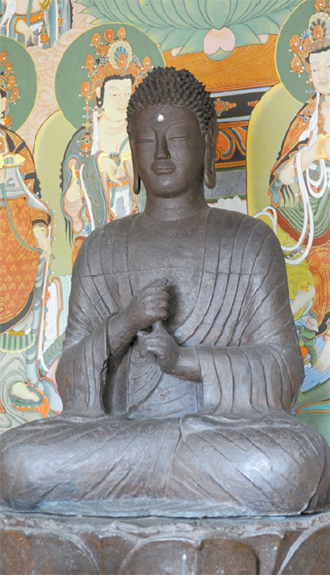 Located in Mount Hwagae, Cheorwon in Gangwon, Dopian Temple was founded in 865 during the reign of Silla’s King Gyeongmun by the great Buddhist monk Doseondaesa. Legends say he founded the temple because the iron image of Vairocana, which had disappeared while being carried to Anyangsa Temple in Cheorwon, was mysteriously found at the site.

While iron Buddhist images were popular from the late Silla to early Goryeo Period, it was quite rare for a pedestal to also be made of iron, like this one.

The Buddha’s body is rather plain and is covered with a long robe that features evenly folded lines. The hands are placed before the chest with the right hand holding the index finger of the left hand.

This gesture, or mudra, which is typical of Vairocana, symbolizes that Buddha and the multitude are one. The Vairocana statue is an outstanding work representing Buddhist images from the later Unified Silla Period (668?935).